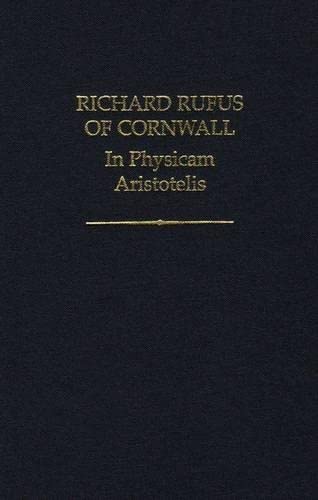 As one of the earliest Western physics teachers, Richard Rufus of Cornwall helped transform Western natural philosophy in the 13th century. But despite the importance of Rufus's works, they were effectively lost for 500 years, and the Physics commentary is the first complete work of his ever to be printed. Rufus taught at the Universities of Paris and Oxford from 1231 to 1256, at the very time when exposure to Aristotle's ibri naturales was revolutionizing the academic curriculum; indeed Rufus gave the earliest surviving lectures on physics and metaphysics. Rufus not only expounded the views of Aristotle and the commentator Averroes, but he also challenged them, and this lively discussion proved to be enormously influential. Rufus rejected Aristotle's theory of projectile motion, and this rival view was later adopted by Franciscus de Marchia. His revised account of the place of the heavens was taken up by Roger Bacon and Thomas Aquinas; and his defence of creation, still considered a cogent reply to Aristotle's claims for a beginningless universe, was to be embraced by both Bacon and Bonaventure. Professor Wood's meticulous edition sheds light on that Crucial period when the medieval West for the first time acquired a comprehensive scientific account of the cosmos.

No one has done more to retrieve Rufus from neglect than Professor Rega Wood...The aim of the Richard Rufus Project is to publish all of Rufus' works. Only when Professor Wood and her team of experienced co-editors and other collaborators have completed their task, will we really be in a position to assess Rufus' influence fully. (Calvin Normore, Amazon)

The edition itself is splendid...Professor Wood and her team have edited conservatively and done an excellent job. (Calvin Normore, Amazon)

Description du livre OUP/British Academy 2004-02-02, 2004. Hardcover. Etat : Good. No Jacket. Item is in good condition. Some moderate creases and wear. This item may not come with CDs or additional parts including access codes for textbooks. This may not have a dust jacket. Might be an ex-library copy and contain writing/highlighting. Photos are stock pictures and not of the actual item. N° de réf. du vendeur DS-0197262740-3