Articles liés ŕ Graph Theory As I Have Known It

Tutte, W. T. Graph Theory As I Have Known It

Graph Theory As I Have Known It 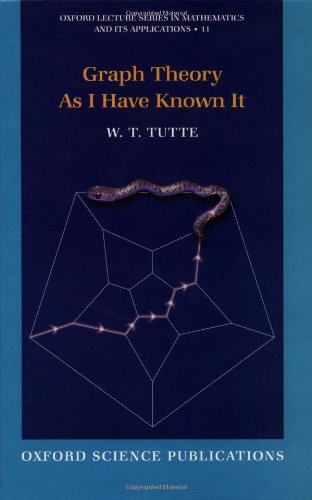 The book is not intended as a comprehensive treatise, and is not a textbook in the classical sense. It provides a unique and unusual introduction to graph theory by one of the founding fathers of the subject. The opening chapter tells of the first problems worked on by the author and his colleagues (collectively know as the Trintity Four). Their interests in graph theory was aroused by a problem in a mathematical puzzle book. Beginning with an account of their work on the construction of perfect squares and rectangles, the subsequent chapters describe the developement of the author's ideas: the disproof of Tait's conjecture on Hamiltonian circuits, factorizing graphs, algebra in graph theory, symmetry in graphs, graphs on spheres, and chromatic eigenvalues.

' For over sixty years, Bill Tutte has worked in Graph Theory and he can truly be called father of the subject...This fanscinating book is an account of some parts of the theory in which he took special interest, and he reveals how he was lead to many of the Theorems and proofs for which he is famous' CMS Notes

This book provides a unique and unusual introduction to graph theory by one of the founding fathers, and will be of interest to all researchers in the subject. It is not intended as a comprehensive treatise, but rather as an account of those parts of the theory that have been of special interest to the author. Professor Tutte details his experience in the area, and provides a fascinating insight into how he was led to his theorems and the proofs he used. As well as being of historical interest it provides a useful starting point for research, with references to further suggested books as well as the original papers. The book starts by detailing the first problems worked on by Professor Tutte and his colleagues during his days as an undergraduate member of the Trinity Mathematical Society in Cambridge. It covers subjects such as comnbinatorial problems in chess, the algebraicization of graph theory, reconstruction of graphs, and the chromatic eigenvalues. In each case fascinating historical and biographical information about the author's research is provided.

1. Graph Theory As I Have Known It (Oxford Lecture Series in Mathematics and Its Applications (11)) [Hardcover] Tutte, W. T.

2. Graph Theory As I Have Known It (Oxford Lecture Series in Mathematics and Its Applications, 11)

3. Graph Theory as I Have Known It (Oxford Lecture Series in Mathematics and Its Applications, Band 11) [Hardcover] Tutte, W. T.