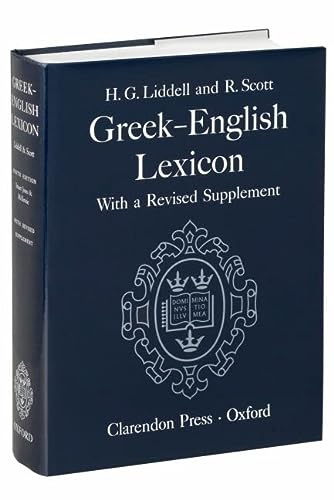 Liddell & Scott's Greek-English Lexicon (9/e 1940) is the most comprehensive and up-to-date ancient Greek dictionary in the world. It is used by every student of ancient Greek in the English-speaking world, and is an essential library and scholarly purchase there and in W. Europe and Japan. The main dictionary covers every surviving ancient Greek author and text discovered up to 1940, from the Pre-Classical Greek of the 11C - 8C BC (for example Homer and Hesiod), through Classical Greek (7C - 5C BC) to the Hellenistic Period, including the Greek Old and New Testaments. Entries list irregular inflections, and together with the definition, each sense includes citations from Greek authors illustrating usage. The Lexicon is Greek into English only, as are other ancient Greek dictionaries. This is the market expectation among both students and scholars. In 1968 the Lexicon was updated with a Supplement, which was available as a separate volume (until 1992) or bound together with the dictionary. Representing the culmination of 13 years' work, the new Revised Supplement is a complete replacement for the 1968 Supplement. Nearly twice the size of the 1968 edition, with over 20,000 entries, it adds to the dictionary words and forms from papyri and inscriptions discovered between 1940 and the 1990s as well as a host of other revisions, updatings, and corrections to the main dictionary. Linear B forms are shown within entries for the first time, and the Revised Supplement gives the dictionary a date-range from 1200 BC to 600 AD. It is fully cross-referenced to the main text but additions have been designed to be easily used without constant reference to the main text.

Peter Clare is also the editor of The Oxford Latin Dictionary (1982, £195). Work on the new Supplement has been overseen by an academic committee appointed by the British Academy.

3. A Greek-English Lexicon, Ninth Edition with a Revised Supplement