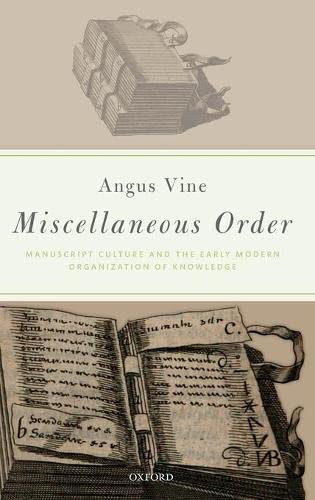 Description du livre Hardback. Etat : New. Language: English. Brand new Book. This book examines one of the most pervasive, but also perplexing, textual phenomena of the early modern world: the manuscript miscellany. Faced with multiple problems of definition, categorization, and (often conflicting) terminology, modern scholars have tended to dismiss the miscellany as disorganized and chaotic. Miscellaneous Order radically challenges that view by uncovering the various forms of organization and order previously hidden in early modernmanuscript books. Drawing on original literary and historical research, and examining both the materiality of early modern manuscripts and their contents, this book sheds new light on the transcriptive and archival practices of early modern Britain, as well as on the broader intellectual context of manuscriptculture and its scholarly afterlives.Based on extensive archival research, and interdisciplinary in both subject and matter, Miscellaneous Order focuses on the myriad kinds of manuscript compiled and produced in the early modern era. Showing that the miscellany was essential to the organization of knowledge across a range of genres and disciplines, from poetry to science, and from recipe books to accounts, it proposes a new model for understanding the proliferation of manuscript material in the sixteenth and seventeenthcenturies. By restoring attention to 'miscellaneous order' in this way, it shows that we have fundamentally misunderstood how early modern men and women read, wrote, and thought. Rather than a textual form characterized by an absence of order, the miscellany, it argues, operated as an epistemically andaesthetically productive system throughout the early modern period. NḞ de réf. du vendeur BZE9780198809708