Moreno, Alfonso Feeding the Democracy: The Athenian Grain Supply in the Fifth and Fourth Centuries BC

Feeding the Democracy: The Athenian Grain Supply in the Fifth and Fourth Centuries BC 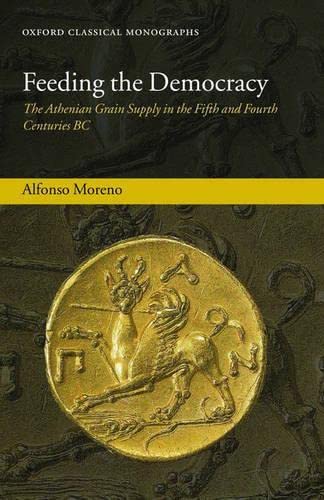 The reliance of democracies on vital supplies of energy from distant and non-democratic sources is probably the most pressing and dangerous problem of modern times, but it is not a new phenomenon. Classical Athens, the birthplace of democracy and the largest and historically most important of the ancient Greek city-states, depended for its survival on the constant importation of grain from overseas lands as remote as Ukraine and southern Russia, and this trade was ultimately controlled by powerful politicians, wealthy landowners, and kings. Alfonso Moreno examines how this resource need determined Athenian foreign policy, prompting recourse to military conquest and ruthless resettlements, and how uncomfortable realities (especially elite control) were made acceptable to popular audiences.This study of ancient trade and politics reveals a Greek world as globalized as our own, and convulsed by the same problems that such interdependence and sophistication entail.

...the great merit of Moreno's reconstruction lies in the fact that it seeks to make proper sense of the enterprise that has been labelled the 'Athenian Empire': imperial expansion, food supply and economic development in both Athens and its possessions... (Water Scheidel, Times Literary Supplement)

2. Feeding the Democracy. The Athenian Grain Supply in the Fifth and Fourth Centuries BC.