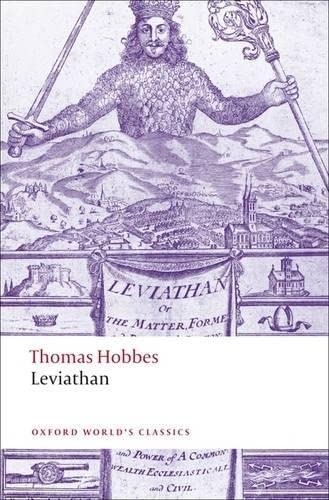 The importance of Hobbes' Leviathan is largely based on the ruthlessness of its logic and the soundness of its arguments. (Contemporary Review)

Everything about these three volumes is testimony to Malcolm's extraordinary scholarly range and precision. Just as impressive is the lucidity of Malcolm's own prose ... Specialists will find fresh insights on almost every page ... Malcolm's measured and gently sceptical style is a perfect complement to Hobbe's own extravagant scepticism (David Runciman, Times Literary Supplement)

The lavish, meticulous annotation . . . is certainly this editions most significant contribution to the republic of letters. But the general reader will probably find Malcolms introduction, a tour de force that takes up the entire first volume, to be of greatest value. Malcolm . . . fluently and authoritatively sets Leviathan and its author in their time and provides a keen and detailed study of Leviathans genesis. Malcolms volume itself is an enduring work of history. (Ben Schwartz, The Atlantic)

Malcolm's edition of Leviathan aims to present the masterpiece as faithfully as possible. The result - a product of many years of labour - is an astonishing achievement of the highest scholarship. We have never before had so accurate and so richly annotated a version of the text, and it is unlikely that there will ever be another that can match this edition. (John Gray, New Statesman)

The most helpful piece of scholarship was Noel Malcolm's translating the Latin version and appendix of Hobbes's Leviathan in his monumental three-volume edition (Christopher Howse, The Spectator (Books of the Year))

He that is to govern a whole nation, must read in himself, not this, or that particular man; but mankind. Leviathan is both a magnificent literary achievement and the greatest work of political philosophy in the English language. Permanently challenging, it has found new applications and new refutations in every generation. Hobbes argues that human beings are first and foremost concerned with their own individual desires and fears. He shows that a conflict of each against every man can only be avoided by the adoption of a compact to enforce peace. The compact involves giving up some of our natural freedom to a sovereign power which will enforce the laws of peace on all citizens. Hobbes also analyses the subversive forces - religion, ambition, private conscience - that threaten to destroy the body politic, Leviathan itself, and return us to the state of war. This new edition reproduces the first printed text, retaining the original punctuation but modernizing the spelling. It offers exceptionally thorough and useful annotation, an introduction that guides the reader through the complexities of Hobbes's arguments, and a substantial index. ABOUT THE SERIES: For over 100 years Oxford World's Classics has made available the widest range of literature from around the globe. Each affordable volume reflects Oxford's commitment to scholarship, providing the most accurate text plus a wealth of other valuable features, including expert introductions by leading authorities, helpful notes to clarify the text, up-to-date bibliographies for further study, and much more.