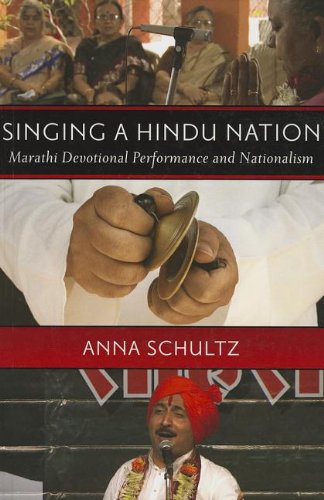 Singing a Hindu Nation is a study of ragsgtriya kirtan, a western Indian performance medium that combines song, Hindu philosophical discourse, and nationalist storytelling. Beginning during the anti-colonial movement of the late nineteenth-century, performers of ragsgtriya kirtan led masses of Marathi-speaking people in temples and streets, and they have continued to preach and sing nationalism as devotion in the post-colonial era, and into the twenty-first century. In this book, author Anna Schultz demonstrates how, through this particular form of musical performance, the political becomes devotional, and explores why it motivates people to action and violence. Through both historical and ethnographic studies, Schultz shows that ragsgtriya kirtan has been especially successful in combining these two realms because kirtankars perform as representatives of the divine sage Narad, thereby infusing their nationalist messages with ritual weight. By speaking and singing in regional idioms with rich associations for Maharashtrian congregations, they use music to combine political and religious signs in ways that seem natural and desirable, promoting embodied experiences of nationalist devotion. As the first monograph on music and Hindu-nationalism, Singing a Hindu Nation presents a rare glimpse into the lives and performance worlds of nationalists on the margins of all-India political parties and cultural organizations, and is an essential resource for ethnomusicologists, as well as scholars of South Asian studies, religion, and political theory.

Elegantly crafted, Singing a Hindu Nation is a historically grounded ethnography of the kirtan genre of singing and storytelling in Maharashtra, India. Exploring a spectrum of devotional performances, Schultz demonstrates the potency of kirtan in animating traditional aesthetic categories and manipulating public opinion. This timely work not only reveals a lesser known facet of Hindu nationalism, it contributes significantly to the growing body of scholarship delineating music's critical role in a variety of Indian modernist projects. (Richard K. Wolf, Professor of Music and South Asian Studies, Harvard University, author of Theorizing the Local: Music Practice and Experience in South Asia and Beyond (OUP, 2009))

Singing a Hindu Nation is by far one of the best books on nationalism and the arts in modern India. Grounded in impeccable ethnographic detail, this fresh and wholly original work illustrates the affective power of Marathi kirtan by foregrounding its relationship to the state, radicalized forms of religion, and the historical imagination. Schultz's pathfinding work is a 'must read' for anyone interested in the cultural history of modern India. (Davesh Soneji, Associate Professor of South Asian Religions, McGill University)

Historically engaged, ethnographically rich, theoretically sophisticated, and clearly born out of a rich personal history within the region. Schultz provides a window into a musical world that many had no idea existed, but that has, since its inception, provided a powerful locus for the formation of Hindu nationalism at the regional level. (Quarterly Journal of the Music Library Association)

Anna Schultz earned the Ph.D. in Ethnomusicology from the University of Illinois. She is an Assistant Professor of Ethnomusicology at Stanford University, where she works on Marathi kirtan, Indo-Caribbean music, paraliturgical Indian Jewish music, and country/bluegrass music.