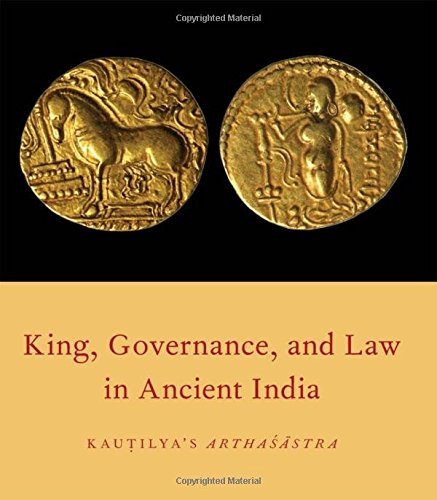 CUA Press is proud to announce the CUA Studies in Canon Law. In conjunction with the School of Canon Law of the Catholic University of America, we are making available, both digitally and in print, more than 400 canon law dissertations from the 1920s 1960s, many of which have long been unavailable. These volumes are rich in historical content, yet remain relevant to canon lawyers today. Topics covered include such issues as abortion, excommunication, and infertility. Several studies are devoted to marriage and the annulment process; the acquiring and disposal of church property, including the union of parishes; the role and function of priests, vicars general, bishops, and cardinals; and juridical procedures within the church. For those who seek to understand current ecclesial practices in light of established canon law, these books will be an invaluable resource

King, Governance, and Law in Ancient India presents an English translation of Kautilya's Arthashastra (AS.) along with detailed endnotes. When it was discovered in 1923, the Arthashastra was described as perhaps the most precious work in the whole range of Sanskrit literature, an assessment that still rings true. This new translation of this significant text, the first in close to half a century takes into account a number of important advances in our knowledge of the texts, inscriptions, and archeological and art historical remains from the period in Indian history to which the AS. belongs (2nd-3rd century CE, although parts of it may be much older). The text is what we would today call a scientific treatise. It codifies a body of knowledge handed down in expert traditions. It is specifically interested in two things: first, how a king can expand his territory, keep enemies at bay, enhance his external power, and amass riches; second, how a king can best organize his state bureaucracy to consolidate his internal power, to suppress internal enemies, to expand the economy, to enhance his treasury through taxes, duties, and entrepreneurial activities, to keep law and order, and to settle disputes among his subjects. The book is accordingly divided into two sections: the first encompassing Books 1-5 deals with internal matters, and the second spanning Books 6-14 deals with external relations and warfare. The AS. stands alone: there is nothing like it before it and there is nothing after it-if there were other textual productions within that genre they are now irretrievably lost. Even though we know of many authors who preceded Kautilya, none of their works have survived the success of the AS. Being "textually" unique makes it difficult to understand and interpret difficult passages and terms; we cannot look to parallels for help. The AS. is also unique in that, first, it covers such a vast variety of topics and, second, it presents in textual form expert traditions in numerous areas of human and social endeavors that were handed down orally. Expert knowledge in diverse fields communicated orally from teacher to pupil, from father to son, is here for the first time codified in text. These fields include: building practices of houses, forts, and cities; gems and gemology; metals and metallurgy; mining, forestry and forest management; agriculture; manufacture of liquor; animal husbandry, shipping, and the management of horses and elephants- and so on. Finally, it is also unique in presenting a viewpoint distinctly different from the Brahmanical "party line" we see in most ancient Indian documents.

Arthasastra is a very important text in the understanding of ancient Hindu thinking, and Olivelle's translation will help researchers to make analyses with precision and without falling into anachronisms. (Strategic Analysis)