Articles liťs ŗ The Design and Implementation of the 4.4 BSD Operating...

The Design and Implementation of the 4.4 BSD Operating System 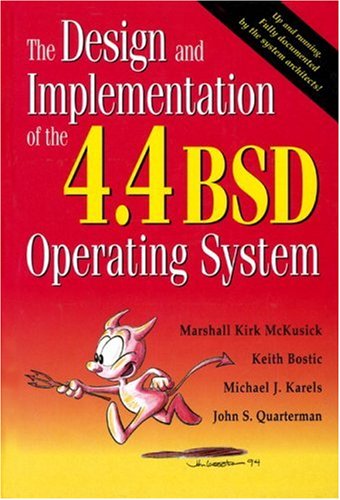 Marshall Kirk McKusick writes books and articles, consults, and teaches classes on UNIX- and BSD-related subjects. While at the University of California at Berkeley, he implemented the 4.2BSD fast file system, and was the research computer scientist at the Berkeley Computer Systems Research Group (CSRG) overseeing the development and release of 4.3BSD and 4.4BSD. He has twice served as the president of the board of the Usenix Association.

Keith Bostic is a member of the technical staff at Berkeley Software Design, Inc. He spent 8 years as a member of the CSRG, overseeing the development of over 400 freely redistributable UNIX-compatible utilities, and is the recipient of the 1991 Distinguished Achievement Award from the University of California, Berkeley, for his work to make 4.4BSD freely redistributable. Concurrently, he was the principle architect of the 2.10BSD release of the Berkeley Software Distribution for PDP-11s, and the coauthor of the Berkeley Log Structured Filesystem and the Berkeley database package (DB). He is also the author of the widely used vi implementation, nvi. He received his undergraduate degree in Statistics and his Masters degree in Electrical Engineering from George Washington University. He is a member of the ACM, the IEEE, and several POSIX working groups. In his spare time, he enjoys scuba diving in the South Pacific, mountain biking, and working on a tunnel into Kirk and Eric's specially constructed wine cellar. He lives in Massachusetts with his wife, Margo Seltzer, and their cats.

Michael J. Karels is the System Architect and Vice President of Engineering at Berkeley Software Design, Inc. He spent 8 years as the Principal Programmer of the CSRG at the University of California, Berkeley as the system architect for 4.3BSD. Karels received his Bachelor's degree in Microbiology from the University of Notre Dame. While a graduate student in Molecular Biology at the University of California, he was the principal developer of the 2.9BSD UNIX release of the Berkeley Software Distribution for the PDP-11. He is a member of the ACM, the IEEE, and several POSIX working groups. He lives with his wife Teri Karels in the backwoods of Minnesota.

John S. Quarterman is Senior Technical Partner at Texas Internet Consulting, which consults in networks and open systems with particular emphasis on TCP/IP networks, UNIX systems, and standards.He is the author of The Matrix: Computer Networks and Conferencing Systems Worldwide (Digital Press, 1990), and is a coauthor of UNIX, POSIX, and Open Systems: The Open Standards Puzzle (1993), Practical Internetworking with TCP/IP and UNIX (1993), The Internet Connection: System Connectivity and Configuration (1994), and The E-Mail Companion: Communicating Effectively via the Internet and Other Global Networks (1994), all published by Addison-Wesley. He is editor of Matrix News, a monthly newsletter about issues that cross network, geographic, and political boundaries, and of Matrix Maps Quarterly; both are published by Matrix Information and Directory Services, Inc. (MIDS) of Austin, Texas. He is a partner in Zilker Internet Park, which provides Internet access from Austin. He and his wife, Gretchen Quarterman, split their time among his home in Austin, hers in Buffalo, New York, and various other locations.

This book describes the design and implementation of the BSD operating system--previously known as the Berkeley version of UNIX. Today, BSD is found in nearly every variant of UNIX, and is widely used for Internet services and firewalls, timesharing, and multiprocessing systems. Readers involved in technical and sales support can learn the capabilities and limitations of the system; applications developers can learn effectively and efficiently how to interface to the system; systems programmers can learn how to maintain, tune, and extend the system. Written from the unique perspective of the system's architects, this book delivers the most comprehensive, up-to-date, and authoritative technical information on the internal structure of the latest BSD system.

As in the previous book on 4.3BSD (with Samuel Leffler), the authors first update the history and goals of the BSD system. Next they provide a coherent overview of its design and implementation. Then, while explaining key design decisions, they detail the concepts, data structures, and algorithms used in implementing the system's facilities. As an in-depth study of a contemporary, portable operating system, or as a practical reference, readers will appreciate the wealth of insight and guidance contained in this book.

Highlights of the book:

1. The Design and Implementation of the 4.4 BSD Operating System

2. The Design and Implementation of the 4.4 BSD Operating System

4. The Design and Implementation of the 4.4 BSD Operating System