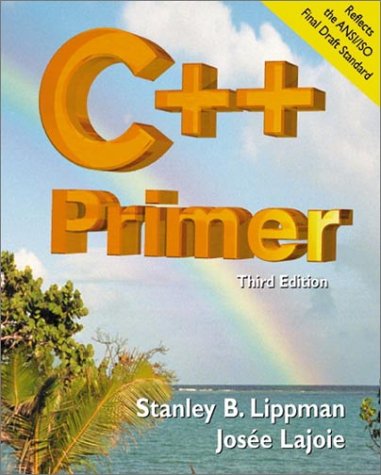 The third edition of the C++ Primer combines Stanley Lippman's practical experience with Josée Lajoie's inside knowledge of the ANSI/ISO Standard C++. This tutorial is rewritten to describe the features and programming usage of Standard C++. Especially useful for developers new to C++ are the many real-world programming examples that illustrate the design of generic and object-oriented programs, the use of templates, and other aspects of program design using Standard C++. In addition, the C++ Primer provides usage and efficiency guidelines where appropriate.

C++ Primer, Third Edition, combines the practical experience and writing of Stanley Lippman, and the inside knowledge of the ANSI/ISO Standards Draft from Josee Lajoie. Completely rewritten, this tutorial is driven by examples which help the novice C++ programmer solve problems in terms of choice of language features, implementation, and efficiency. Programming aspects of the language are presented in the context of solving a particular problem or programming task. Language rules are given both to clearly introduce the rule and provide a reference to it. The book covers the new C++ Standard Library, including extensive treatment of what was formerly known as the Standard Template Library (STL), as well as the string and complex class types. It also examines the new language features introduced into the International Standard, such as Exception Handling, Run-Time Type Identification, Namespaces, the built-in bool type, and new-style cast-notation.