Marshall, Stephen A. Beetles: The Natural History and Diversity of Coleoptera 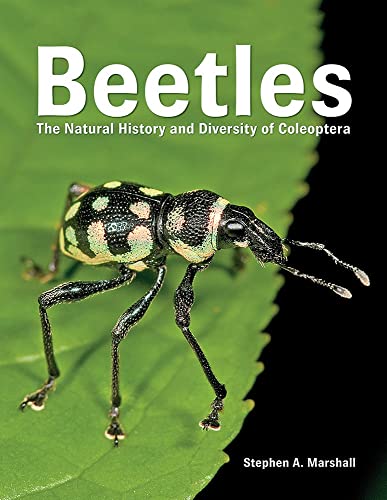 An accessible but comprehensive overview of beetles, illustrated with 4,500 photographs. Among Stephen Marshall's many other natural history titles are Insects: Their Natural History and Diversity and Flies: The Natural History and Diversity of Diptera, two of the most respected books on the insect world published in the last 20 years. More admirable than the books' rigorous science, however, is that they are wholly suitable for a lay audience, including student readers from high school on. The books have been adopted as classroom texts and assigned as required reading at the university level and are on the references shelves of many practicing entomologists. In Beetles: The Natural History and Diversity of Coleoptera, Marshall has again applied his deep knowledge of the insect world. Comprehensive and packed with 27 pages of richly illustrated keys and 4,500 colour illustrations, it provides the reader with a colourful and enjoyable introduction to the natural history of a huge group of organisms, along with an overview of the diversity of fascinating families included in the group. The subject of this book is an enormous one, since the beetles, or Coleoptera, include almost 400,000 named species. Marshall opens with a description of what makes a beetle a beetle, and then introduces the natural history of the order with copious examples and explanations. Part one of the book includes: 1. Life Histories of Beetles: Form and Function: Eggs; Larvae; Pupae, Prepupae and Cocoons; Adults; Courtship and Mating Behaviors. 2. Defense and Deception: Tanks, Tricks and Coleopteran; Chemical Warfare; Brilliance and Bioluminescence in the Beetles. 3. Freshwater and Marine Beetles: Freshwater beetles; Marine beetles. 4. Beetle Associations with Fungi, Dung and Carrion: Beetles and Fungi; Beetles and Dung; Beetles and Dead Bodies 5. Beetles, Plants and Plant Products: Beetles and Flowers; Phytophagy and Beetle Diversity; Aposematic Beetles and Their Plant Hosts; Beetles as Agricultural and Garden Pests; Beetles and Biological Control of Weeds; Beetles and Trees 6. Beetles and Other Animals: Dangerous Beetles; Coleoptera and Culture; Beetles Indoors; Rare, Endangered and Threatened Beetles; Beetles, Birds and Wild Mammals; Beetles and Other Invertebrates. Part two of Beetles is a guided tour of the diversity of the order, with fascinating stops for all of the world's 180 or so families of beetles as well as most of the significant subfamilies. Thousands of photos, almost all taken in the field by the author, are used to capture the range of form and function in each family, with pages of examples of the popular groups - such as fireflies, tiger beetles, jewel beetles - but also with unique photographs of little-known groups ranging from longlipped beetles to the rarest rove beetles. Essential information about importance, range, behaviour and biology is provided for each group, and easily used photographic keys to most families are provided for those wishing to use the book as an identification guide. The profusely illustrated keys in Beetles, linked to the unprecedented photographic coverage of the world's beetle families and subfamilies, enable readers to identify most families of beetles quickly and accurately, and to readily access information about each family as well as hundreds of distinctive genera and species. Like its companion titles, Insects and Flies, Beetles will be welcomed by the scientific, academic and naturalist communities, including the next generation of students of entomology.

Stephen A. Marshall is a professor of entomology in the School of Environmental Sciences, University of Guelph, Ontario. He has discovered hundreds of taxa new to science and published over 200 papers on insect systematics and biodiversity. When he is not working in the University of Guelph Insect Collection (Canada's oldest insect collection) he can usually be found in his bug-rich backyard on the banks of the Grand River near his hometown.