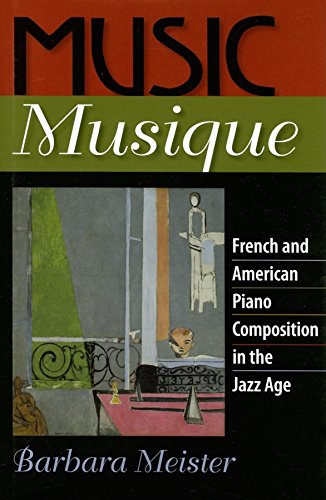 "Music Musique" is a study of American and French composers active in the late 19th through early 20th centuries and the influence of jazz on their compositional styles. Starting with a look at the formation of American and French styles of composition, Meister discusses the jazz influence on American composers such as Ives, Copland, and Seeger, and their reception in France. She then takes a parallel look at the jazz influence on prominent French composers such as Ravel, Milhaud, and Messiaen, with a conclusion that briefly outlines post-World War II musical developments. Considerable attention is paid to the social and political worlds in which these artists lived and created. Of particular interest is the community of Afro-American jazz musicians who settled in Paris after World War I, and their influence on the likes of Ravel, Milhaud, Satie, and other artists with New Orleans-based styles. Meister also discusses the more famous coteries of American writers who lived and worked in Paris during the 1920s and 1930s. The stories of these two groups of Americans in Paris form a fascinating background to the main topic of the book. "Music Musique" is intended for amateurs and experts alike; it provides ideas about repertoire as well as information about compositions that are likely to be heard in performance. The emphasis of the text is always on the piano solo literature or other piano music - song accompaniments, piano duets, or internal orchestral piano parts. Barbara Meister is author of "Nineteenth Century French Art Song" (Indiana University Press). She is active as an accompanist, chamber musician, solo pianist, and lecturer on art songs. Her recent CD for Centaur is entitled Twentieth-Century American Music.