Articles liés ŕ I Am Malala: The Girl Who Stood Up for Education and...

Yousafzai, Malala; Lamb, Christina I Am Malala: The Girl Who Stood Up for Education and was Shot by the Taliban

I Am Malala: The Girl Who Stood Up for Education and was Shot by the Taliban 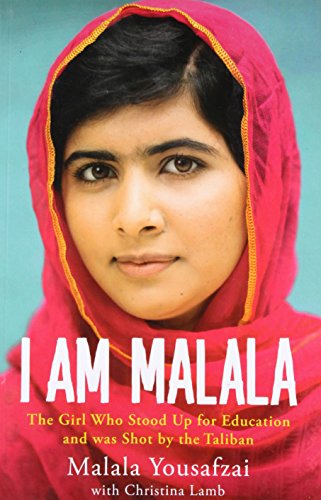 By Malala Yousafzai ; Christina Lamb ( Author ) [ I Am Malala: The Girl Who Stood Up for Education and Was Shot by the Taliban By Nov-2013 Paperback

For sheer inspiration read I Am Malala (Kirsty Brimelow THE TIMES)

Not only powerful, but also very instructive about the recent history of Pakistan and the pressures of everyday life there. One finishes the book full of admiration both for Malala, and for her father, who has clearly inspired her (THE SUNDAY TIMES)

Malala Yousafzai's story begins with her parents being commiserated with after producing a baby girl. In their part of northern Pakistan, she says, rifle shots ring out in celebration of a baby boy's arrival. But there is no such fanfare for females: their destiny is to cook and clean, to be neither seen nor heard... So how did Malala, who barely warranted a mention in her family's genealogy, become destined for the history books as a powerful symbol for girls' universal right to an education? Her memoir I Am Malala tells us how (Baroness Warsi DAILY TELEGRAPH)

This memoir brings out her best qualities. You can only admire her courage and determination. Her thirst for education and reform appear genuine. She also has an air of innocence, and there is an indestructible confidence. She speaks with such poise that you forget Malala is 16 (Ziauddin Sardar THE TIMES)

The medical team that saved Malala; her own stoicism and resilience; the support of her family, now, again in exile, this time in Birmingham; Malala's level-headed resolve to continue to champion education and children's rights - these are all powerful reminders of the best in human nature. Much of the money Malala has been awarded has gone to the Malala fund (www.malalafund.org). "Please join my mission," she asks. It's vital that those of us who can, do (Yvonne Roberts OBSERVER)

A MEMOIR BY THE YOUNGEST RECIPIENT OF THE NOBEL PEACE PRIZE

"I come from a country that was created at midnight. When I almost died it was just after midday."

When the Taliban took control of the Swat Valley in Pakistan, one girl spoke out. Malala Yousafzai refused to be silenced and fought for her right to an education.

On Tuesday, October 9, 2012, when she was fifteen, she almost paid the ultimate price. She was shot in the head at point-blank range while riding the bus home from school, and few expected her to survive.

Instead, Malala's miraculous recovery has taken her on an extraordinary journey from a remote valley in northern Pakistan to the halls of the United Nations in New York. At sixteen, she became a global symbol of peaceful protest and the youngest nominee ever for the Nobel Peace Prize.

I AM MALALA is the remarkable tale of a family uprooted by global terrorism, of the fight for girls' education, of a father who, himself a school owner, championed and encouraged his daughter to write and attend school, and of brave parents who have a fierce love for their daughter in a society that prizes sons.

I AM MALALA will make you believe in the power of one person's voice to inspire change in the world.

1. I Am Malala: The Girl Who Stood Up for Education and was Shot by the Taliban