Heylin, Clinton All Yesterdays' Parties: The Velvet Underground in Print, 1966-1971

All Yesterdays' Parties: The Velvet Underground in Print, 1966-1971 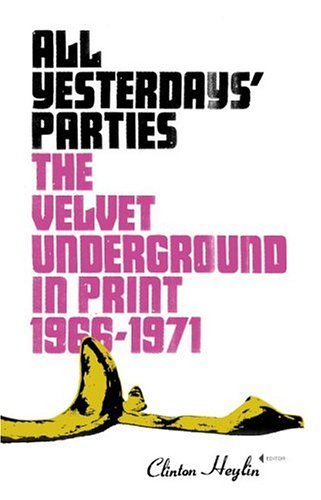 The Velvet Underground are among the most influential bands of all time. Their trademark sound is easily detected in David Bowie, Iggy Pop, Talking Heads, R.E.M., Jane's Addiction, Yo La Tengo, Luna, and the Strokes, and they are also credited with creating a streetwise, pre-punk sensibility that has become inseparable from the popular image of downtown New York. “Discovered” by Andy Warhol in 1966, the VU-with their original line-up of Lou Reed, John Cale, Sterling Morrison, and Mo Tucker-would soon become the house band of the avant-garde, composing songs simultaneously furious in their abrasiveness and beautiful in their pathos, standing in striking contrast to the prevailing flower power of the era.With such a notorious pedigree, it's only natural that the story of the VU has become shrouded in myth and hyperbole. All Yesterdays' Parties gathers for the first time almost all of the published writings contemporary with the band's existence-from sources as mainstream as the New York Times to vanished voices of the counterculture like Oz, Open City, Fusion, and Crawdaddy! It's an invaluable snapshot of an era by trailblazing rock writers such as Lester Bangs, Robert Greenfield, Sandy Pearlman, and Paul Williams. With the most complete VU discography assembled to date, a biographical overview by editor and author Clinton Heylin, and photographs, posters, and other visual evocations of the period throughout, All Yesterdays' Parties is an invaluable resource, a trove of lore for anyone interested in the VU, their roots, and legacy.

Clinton Heylin is the author of Despite the System: Orson Welles Versus the Hollywood Studios , Can You Feel the Silence?: Van Morrison-A New Biography , Bob Dylan: Behind the Shades, From the Velvets to the Voidoids , and many other books. He lives in Somerset, England.

4. All Yesterdays' Parties: The Velvet Underground in Print, 1966-1971 Clinton Heylin