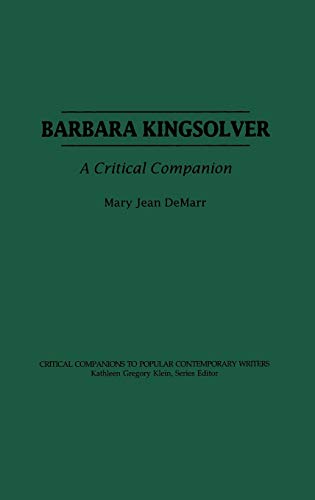 Description du livre ABC-CLIO, United States, 1999. Hardback. Etat : New. Language: English. Brand new Book. Barbara Kingsolver wears the feminist mantle with joyful pride, and her spirited embrace of political themes is contagious. Responding to richly-drawn heroines along their journeys to do right by family and community, readers embrace Kingsolver's political novels, making them bestsellers. From the haunting Arizona landscape of Kingsolver's early trilogy of novels, to the lush African jungle that sets the scene in her latest, The Poisonwood Bible, Kingsolver weaves colorful tapestries with vivid prose, exceptional intelligence, and unexpected humor. DeMarr's comprehensive treatment covers not only Kingsolver's four novels, each with its own chapter, but also discusses with considerable insight her background as a feminist, as a journalist, and, most importantly, as a humanist.Introducing readers to Kingsolver, DeMarr devotes a chapter to her life and work, showing how the two are deeply intertwined. While Kingsolver's writing is never strictly autobiographical, the well-researched section on politics and genre discusses how experiences in Kingsolver's own life and in her work as a political journalist have influenced her fiction writing. In addition to the celebrated novels that readers have come to love: The Bean Trees, Pigs in Heaven, Animal Dreams, and The Poisonwood Bible, as well as the poems and short stories, DeMarr covers the nonfiction: the essays and political writings. A full chapter analyzes each novel in terms of plot and character development, thematic content, symbolism, and the importance of place and language. Students and fans of Kingsolver will find this work, including its well-organized bibliography, accessible and interesting. N° de réf. du vendeur LHB9780313306389