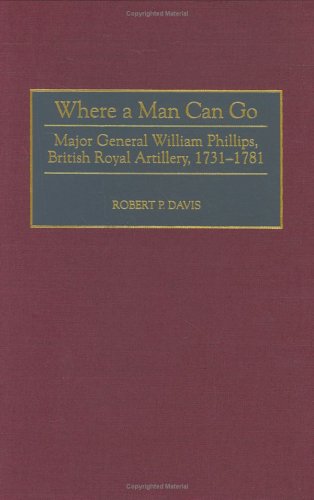 Description du livre ABC-CLIO, United States, 1999. Hardback. Etat : New. New. Language: English. Brand new Book. This is the first published account of the life of Major General William Phillips, a British officer whose achievements during the American Revolution place him in the ranks of Britain's most successful generals such as Charles Cornwallis. Although he was a commoner, Phillips rose from the rank of cadet in the Royal Artillery Academy, distinguished himself through remarkable achievements in Europe's Seven Years War, and went on to command a field army in America. This story chronicles his extraordinary abilities, leadership, and innovative style which left a lasting mark on British artillery tactics and military leadership. It provides new insights into the captivity of Burgoyne's army, British operations in Virginia in 1781, and the first detailed account of the Battle of Petersburg, Virginia.In this probing biography, suitable for military buffs and historians alike, Davis uncovers new and fascinating materials about Phillips' life, including his connivance with General Cornwallis to change British strategy in the American southern theater. Though Phillips has largely been denied attention throughout history, Davis' work goes a long way toward restoring his rightful place. N° de réf. du vendeur AAJ9780313310201