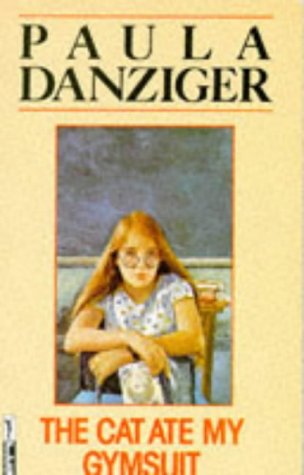 A gorgeous new package for Paula Danziger’s backlist with an introduction from Ann Martin!


Marcy's life is a mess. Her parents don't understand her, she feelslike a fat blimp with no friends, and her favorite teacher just got fired. Ms. Finney wasn't like the other teachers, and she was helping Marcy feel good about being herself. Now that she's gone, Marcy doesn't know what to do. She's always thought things would be better if she could just lose weight, but the loss of Ms. Finney sparks something inside her. She decides to join the fight to bring back her teacher, and in doing so, she discovers that her voice might matter more than she ever realized.

Paula Danziger’s novels are hilarious, genuine, and full of dynamic female characters that have won the hearts of her readers and turned her books into beloved classics. These playful covers full of charming details capture the spirit of Paula’s stories and will brighten up the book­shelves of her fans and a new generation of readers. Biographie de l'auteur :

Paula Danziger was born in Washington DC, because, her parents said, 'In that way no state could disown her'. A short while later the family moved to New Jersey where they remained, except for a brief time spent on a farm in Pennsylvania. Previously a teacher, Paula's first book, The Cat Ate My Gymsuit, was published in 1974. Since then she has written more than twenty books, including the bestselling Amber Brown series with Tony Ross. Paula lives in New York City, but spends a lot of time in London, when she isn't travelling the world. She likes reading, being with friends, shopping, playing pinball and putting stickers on everything.

Description du livre Paperback. Etat : Used; Good. Dispatched, from the UK, within 48 hours of ordering. This book is in good condition but will show signs of previous ownership. Please expect some creasing to the spine and/or minor damage to the cover. Grubby book may have mild dirt or some staining, mostly on the edges of pages. Aged book. Tanned pages and age spots, however, this will not interfere with reading. N° de réf. du vendeur CHL6947850

Description du livre Paperback. Etat : Used; Good. Dispatched, from the UK, within 48 hours of ordering. This book is in good condition but will show signs of previous ownership. Please expect some creasing to the spine and/or minor damage to the cover. N° de réf. du vendeur CHL1913641

Description du livre Paperback. Etat : Very Good. The book has been read, but is in excellent condition. Pages are intact and not marred by notes or highlighting. The spine remains undamaged. N° de réf. du vendeur GOR010445087

Description du livre Paperback. Etat : Good. All orders are dispatched the following working day from our UK warehouse. Established in 2004, we have over 500,000 books in stock. No quibble refund if not completely satisfied. N° de réf. du vendeur mon0004885327

Description du livre Etat : Very Good. This book is in very good condition and will be shipped within 24 hours of ordering. The cover may have some limited signs of wear but the pages are clean, intact and the spine remains undamaged. This book has clearly been well maintained and looked after thus far. Money back guarantee if you are not satisfied. See all our books here, order more than 1 book and get discounted shipping. . N° de réf. du vendeur 7719-9780330298490

Description du livre Etat : Very Good. Shipped within 24 hours from our UK warehouse. Clean, undamaged book with no damage to pages and minimal wear to the cover. Spine still tight, in very good condition. Remember if you are not happy, you are covered by our 100% money back guarantee. N° de réf. du vendeur 6545-9780330298490

Description du livre Paperback. Etat : Used; Good. **Simply Brit** Shipped with Premium postal service within 24 hours from the UK with impressive delivery time. We have dispatched from our book depository; items of good condition to over ten million satisfied customers worldwide. We are committed to providing you with reliable and efficient service at all times. N° de réf. du vendeur 3136758

Description du livre Paperback. Etat : Used; Good. **SHIPPED FROM UK** We believe you will be completely satisfied with our quick and reliable service. All orders are dispatched as swiftly as possible! Buy with confidence!. N° de réf. du vendeur 3934202

THE CAT ATE MY GYMSUIT