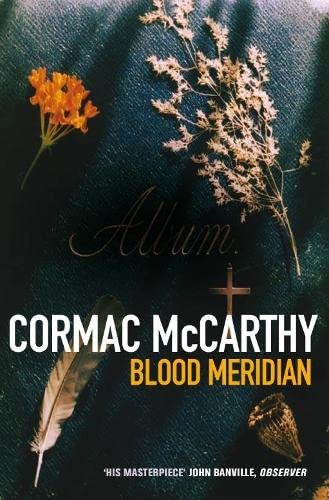 Extrait :
Blood Meridian (1985) seems to me the authentic American apocalyptic novel, more relevant even in 2000 than it was fifteen years ago. The fulfilled renown of Moby-Dick and of As I Lay Dying is augmented by Blood Meridian, since Cormac McCarthy is the worthy disciple both of Melville and of Faulkner. I venture that no other living American novelist, not even Pynchon, has given us a book as strong and memorable as Blood Meridian, much as I appreciate Don DeLillo's Underworld, Philip Roth's Zuckerman Bound, Sabbath's Theater, and American Pastoral, and Pynchon's Gravity's Rainbow and Mason & Dixon. McCarthy himself, in his recent Border trilogy, commencing with the superb All the Pretty Horses, has not matched Blood Meridian, but it is the ultimate Western, not to be surpassed.

My concern being the reader, I will begin by confessing that my first two attempts to read through Blood Meridian failed, because I flinched from the overwhelming carnage that McCarthy portrays. The violence begins on the novel's second page, when the fifteen-year-old Kid is shot in the back and just below the heart, and continues almost with no respite until the end, thirty years later, when Judge Holden, the most frightening figure in all of American literature, murders the Kid in an outhouse. So appalling are the continuous massacres and mutilations of Blood Meridian that one could be reading a United Nations report on the horrors of Kosovo in 1999.

Nevertheless, I urge the reader to persevere, because Blood Meridian is a canonical imaginative achievement, both an American and a universal tragedy of blood. Judge Holden is a villain worthy of Shakespeare, Iago-like and demoniac, a theoretician of war everlasting. And the book's magnificence-its language, landscape, persons, conceptions-at last transcends the violence, and converts goriness into terrifying art, an art comparable to Melville's and to Faulkner's. When I teach the book, many of my students resist it initially (as I did, and as some of my friends continue to do). Television saturates us with actual as well as imagined violence, and I turn away, either in shock or in disgust. But I cannot turn away from Blood Meridian, now that I know how to read it, and why it has to be read. None of its carnage is gratuitous or redundant; it belonged to the Mexico-Texas borderlands in 1849-50, which is where and when most of the novel is set. I suppose one could call Blood Meridian a "historical novel," since it chronicles the actual expedition of the Glanton gang, a murderous paramilitary force sent out both by Mexican and Texan authorities to murder and scalp as many Indians as possible. Yet it does not have the aura of historical fiction, since what it depicts seethes on, in the United States, and nearly everywhere else, as we enter the third millennium. Judge Holden, the prophet of war, is unlikely to be without honor in our years to come.

Even as you learn to endure the slaughter McCarthy describes, you become accustomed to the book's high style, again as overtly Shakespearean as it is Faulknerian. There are passages of Melvillean-Faulknerian baroque richness and intensity in The Crying of Lot 49, and elsewhere in Pynchon, but we can never be sure that they are not parodistic. The prose of Blood Meridian soars, yet with its own economy, and its dialogue is always persuasive, particularly when the uncanny Judge Holden speaks (chapter 14, p. 199):

The judge placed his hands on the ground. He looked at his inquisitor. This is my claim, he said. And yet everywhere upon it are pockets of autonomous life. Autonomous. In order for it to be mine nothing must be permitted to occur upon it save by my dispensation.

Toadvine sat with his boots crossed before the fire. No man can acquaint himself with everything on this earth, he said.

The judge tilted his great head. The man who believes that the secrets of this world are forever hidden lives in mystery and fear. Superstition will drag him down. The rain will erode the deeds of his life. But that man who sets himself the task of singling out the thread of order from the tapestry will by the decision alone have taken charge of the world and it is only by such taking charge that he will effect a way to dictate the terms of his own fate.

Judge Holden is the spiritual leader of Glanton's filibusters, and McCarthy persuasively gives the self-styled judge a mythic status, appropriate for a deep Machiavelli whose "thread of order" recalls Iago's magic web, in which Othello, Desdemona, and Cassio are caught. Though all of the more colorful and murderous raiders are vividly characterized for us, the killing-machine Glanton with the others, the novel turns always upon its two central figures, Judge Holden and the Kid. We first meet the Judge on page 6: an enormous man, bald as a stone, no trace of a beard, and eyes without either brows or lashes. A seven-foot-tall albino almost seems to have come from some other world, and we learn to wonder about the Judge, who never sleeps, dances and fiddles with extraordinary art and energy, rapes and murders little children of both sexes, and who says that he will never die. By the book's close, I have come to believe that the Judge is immortal. And yet the Judge, while both more and less than human, is as individuated as Iago or Macbeth, and is quite at home in the Texan-Mexican borderlands where we watch him operate in 1849-50, and then find him again in 1878, not a day older after twenty-eight years, though the Kid, a sixteen-year-old at the start of Glanton's foray, is forty-five when murdered by the Judge at the end.

McCarthy subtly shows us the long, slow development of the Kid from another mindless scalper of Indians to the courageous confronter of the Judge in their final debate in a saloon. But though the Kid's moral maturation is heartening, his personality remains largely a cipher, as anonymous as his lack of a name. The three glories of the book are the Judge, the landscape, and (dreadful to say this) the slaughters, which are aesthetically distanced by McCarthy in a number of complex ways.

What is the reader to make of the Judge? He is immortal as principle, as War Everlasting, but is he a person, or something other? McCarthy will not tell us, which is all the better, since the ambiguity is most stimulating. Melville's Captain Ahab, though a Promethean demigod, is necessarily mortal, and perishes with the Pequod and all its crew, except for Ishmael. After he has killed the Kid, Blood Meridian's Ishmael, Judge Holden is the last survivor of Glanton's scalping crusade. Destroying the Native American nations of the Southwest is hardly analogous to the hunt to slay Moby-Dick, and yet McCarthy gives us some curious parallels between the two quests. The most striking is between Melville's chapter 19, where a ragged prophet, who calls himself Elijah, warns Ishmael and Queequeg against sailing on the Pequod, and McCarthy's chapter 4, where "an old disordered Mennonite" warns the Kid and his comrades not to join Captain Worth's filibuster, a disaster that preludes the greater catastrophe of Glanton's campaign.

McCarthy's invocation of Moby-Dick, while impressive and suggestive, in itself does not do much to illuminate Judge Holden for us. Ahab has his preternatural aspects, including his harpooner Fedellah and Parsee whaleboat crew, and the captain's conversion to their Zoroastrian faith. Elijah tells Ishmael touches of other Ahabian mysteries: a three-day trance off Cape Horn, slaying a Spaniard in front of a presumably Catholic altar in Santa, and a wholly enigmatic spitting into a "silver calabash."Yet all these are transparencies compared to the enigmas of Judge Holden, who seems to judge the entire earth, and whose name suggests a holding, presumably of sway over all he encounters. And yet, the Judge, unlike Ahab, is not wholly fictive; like Glanton, he is a historic filibuster or freebooter. McCarthy tells us most in the Kid's dream visions of Judge Holden, towards the close of the novel (chapter 22, pp. 309—10):

In that sleep and in sleep to follow the judge did visit. Who would come other? A great shambling mutant, silent and serene. Whatever his antecedents, he was something wholly other than their sum, nor was there system by which to divide him back into his origins for he would not go. Whoever would seek out his history through what unraveling of loins and ledgerbooks must stand at last darkened and dumb at the shore of a void without terminus or origin and whatever science he might bring to bear upon the dusty primal matter blowing down out of the millennia will discover no trace of ultimate atavistic egg by which to reckon his commencing.

I think that McCarthy is warning his reader that the Judge is Moby-Dick rather than Ahab. As another white enigma, the albino Judge, like the albino whale, cannot be slain. Melville, a professed Gnostic, who believed that some "anarch hand or cosmic blunder" had divided us into two fallen sexes, gives us a Manichean quester in Ahab. McCarthy gives Judge Holden the powers and purposes of the bad angels or demiurges that the Gnostics called archons, but he tells us not to make such an identification (as the critic Leo Daugherty eloquently has). Any "system," including the Gnostic one, will not divide the Judge back into his origins. The "ultimate atavistic egg" will not be found. What can the reader do with the haunting and terrifying Judge?
Présentation de l'éditeur :
"The fulfilled renown of Moby-Dick and of As I Lay Dying is augmented by Blood Meridian, since Cormac McCarthy is the worthy disciple both of Melville and Faulkner," writes esteemed literary scholar Harold Bloom in his Introduction to the Modern Library edition. "I venture that no other living American novelist, not even Pynchon, has given us a book as strong and memorable."

Cormac McCarthy's masterwork, Blood Meridian, chronicles the brutal world of the Texas-Mexico borderlands in the mid-nineteenth century. Its wounded hero, the teenage Kid, must confront the extraordinary violence of the Glanton gang, a murderous cadre on an official mission to scalp Indians and sell those scalps. Loosely based on fact, the novel represents a genius vision of the historical West, one so fiercely realized that since its initial publication in 1985 the canon of American literature has welcomed Blood Meridian to its shelf.

"A classic American novel of regeneration through violence," declares Michael Herr. "McCarthy can only be compared to our greatest writers."