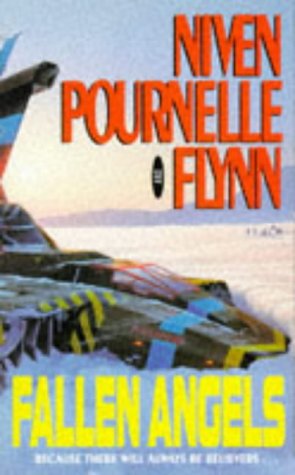 Larry Niven (left) is the Hugo and Nebula Award-winning author of such classics as Ringworld, The Integral Trees, and Destiny's Road. He has also collaborated with both Jerry Pournelle and Steven Barnes on The Legacy of Heorot, Beowulf's Children, and the bestselling Dream Park series. He lives in Chatsworth, California.
Larry Niven and Jerry Pournelle were the joint winners of the 2005 Robert A. Heinlein Award.

Jerry Pournelle (right), a past winner of the John W. Campbell Award, has collaborated with Niven on numerous bestsellers. He has also written such successful solo novels as Janissaries and Starswarm. He lives in Studio City, California.
Larry Niven and Jerry Pournelle were the joint winners of the 2005 Robert A. Heinlein Award.

Reeling under a new ice age, the lunatic fringe of the environmental movement controls the US government. Abandoned by Earth, the space colonies replenish their air by scoop-ships diving into the atmosphere - but Alex and Gordon's ship was hit by a missile, and they are now wanted dead or alive.

Description du livre Pan Books, 1994. Paperback. Etat : Used; Acceptable. Dispatched, from the UK, within 48 hours of ordering. The book is perfectly readable and fit for use, although it shows signs of previous ownership. The spine is likely creased and the cover scuffed or slightly torn. Textbooks will typically have an amount of underlining and/or highlighting, as well as notes. If this book is over 5 years old, then please expect the pages to be yellowing or to have age spots. Aged book. Tanned pages and age spots, however, this will not interfere with reading. NḞ de réf. du vendeur CHL6619812

Description du livre Tor, 1994. Paperback. Etat : Good. All orders are dispatched the following working day from our UK warehouse. Established in 2004, we have over 500,000 books in stock. No quibble refund if not completely satisfied. NḞ de réf. du vendeur mon0005360112

Description du livre Tor, 1994. Paperback. Etat : Used; Good. **Simply Brit** Shipped with Premium postal service within 24 hours from the UK with impressive delivery time. We have dispatched from our book depository; items of good condition to over ten million satisfied customers worldwide. We are committed to providing you with reliable and efficient service at all times. NḞ de réf. du vendeur 1109032

Description du livre Tor, 1994. Paperback. Etat : Used; Good. **SHIPPED FROM UK** We believe you will be completely satisfied with our quick and reliable service. All orders are dispatched as swiftly as possible! Buy with confidence!. NḞ de réf. du vendeur 2096572

Description du livre Pan Books, 1994. Paperback. Etat : Very Good. Fallen Angels This book is in very good condition and will be shipped within 24 hours of ordering. The cover may have some limited signs of wear but the pages are clean, intact and the spine remains undamaged. This book has clearly been well maintained and looked after thus far. Money back guarantee if you are not satisfied. See all our books here, order more than 1 book and get discounted shipping. . NḞ de réf. du vendeur 7719-9780330335997

Description du livre Pan Macmillan, United Kingdom, London, 1994. Paperback. Etat : Very Good. 2073. Earth falls victim to a new ice age and parodoxically, the Green politicians have rejected the technology that could save the planet. Two astronauts have crash-landed in the frozen American midwest - their only hope of survival is a group of science enthusiasts who can return them to freedom. The book has been read, but is in excellent condition. Pages are intact and not marred by notes or highlighting. The spine remains undamaged. NḞ de réf. du vendeur GOR003681315