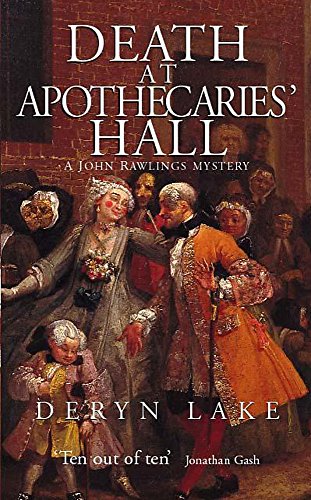 When Liveryman Alleyn dies after an extraordinary outbreak of food poisoning at the Worshipful Society dinner, London's famous blind magistrate, John Fielding, calls in John Rawlings to investigate whether it is a case of deliberate poisoning. As John searches for gossip, he discovers that a fellow apothecary had visited the dying man's house on the morning of his death, that the Beadle has fallen out with the Master, that a bereaved parent whose son died as a result of misdiagnosis has vowed vengeance on the entire Society. John Rawlings, London's effervescent 18th Century apothecary and occasional sleuth, tackles his most intriguing case to date in Deryn Lake's brilliant historical mystery.

'One of the best mystery series to hand at present is the John Rawlings historical crime line...ten out of ten' (Jonathan Gash)

'An effervescent tale...the author organises her large cast and colourful background with skill and gusto through a racily readable drama' (Mail on Sunday)

'The Queen of the Georgian mystery consolidates her reputation with this novel...The charm of Lake's series is the astringent relationship between her two protagonists, which pulls off the trick of appearing both modern and historically persuasive' (The Times)