Articles liés ŕ Mr Croc: What Have You Got Mr Croc?

Lodge, Jo Mr Croc: What Have You Got Mr Croc?

Mr Croc: What Have You Got Mr Croc? 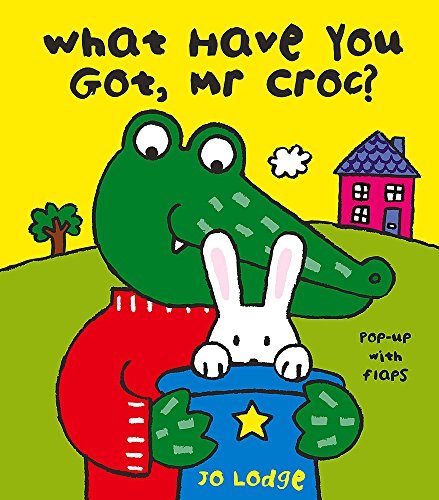 Another title that will be leapt upon by both sexes is What Have You Got, Mr Croc? (Hodder Children's Books Ł6.99, pp12), the fourth in Jo Lodge's delightful Mr Croc series. Based on the idea of counting Mr Croc's animal friends, it boasts fabulous pop-ups and a fantastic set of snappy crocodile teeth. All the better to gobble up those summer ice-creams with. (The Observer)

Mr Croc is turning his hand to all sort of magic and wizardry, producing rabbits from hats and kittens from his linen basket. With a fun counting theme, this boldly illustrated pop-up book introduces animals and teachesn umbers in a vibrant and lively way. (Junior)

A great book which enables very young children to learn how to count up to five in a fun and exciting way. The vibrant colours, pop-up images and imaginative use of tabs ensure that the child is engaged with every page... The bright and simple but effective pop-ups encourage them to find out what Mr Croc has in his house and garden - over and over again. (Carousel)

One of our favourite characters returns for more pre-school fun in What Have you Got, Mr Croc, which as well as featuring some snappy pull-out tabs, also encourages the learning of numbers up to five. (Cork Evening Echo)

A counting book for beginners... The youngest reader will enjoy pulling the tabs to find more hidden occupants and will joyfully extend their counting to five. (Carousel)

Jo Lodge is an illustrator and paper engineer and was greatly influenced by her artistic parents - her mother, Maureen Roffey, an illustrator, and her father Bernard Lodge, a graphic designer. Her first books were published by Rod Campbell and her boldly coloured animal characters have starred in a a wide range of books. Jo was nominated for the Sainsbury's Baby Book Award in 2001, was finalist for the Sheffield Baby Book Award in 2007 and was shortlisted for the Booktrust Early years awards in 2010. She is perhaps best known for her Mr Croc books which have been a hit around the the world with sales exceeding 1 million copies. She lives in West Sussex with her husband and two sons. To find out more about Jo and her books, visit www.jolodge.com

What Have You Got Mr Croc? Lodge, Jo