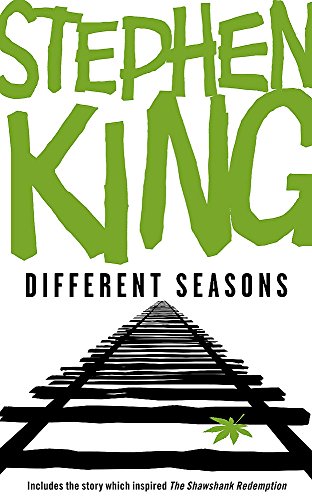 “Rita Hayworth and the Shawshank Redemption”

An unjustly imprisoned convict seeks a strange and startling revenge ... the basis for the Best Picture Academy Award® nominee The Shawshank Redemption.

Todd Bowden is one of the top students in his high school class and a typical American sixteen-year-old—until he becomes obsessed with the dark and deadly past of an older man in town. The inspiration for the film Apt Pupil from Phoenix Pictures.

Four rambunctious young boys plunge through the facade of a small town and come face-to-face with life, death, and intimations of their own mortality. The film Stand By Me is based on this novella.

A disgraced woman is determined to triumph over death.

“To find the secret of his success, you have to compare King to Twain and Poe—King’s stories tap the roots of myth buried in all our minds.”

Carrie
’Salem’s Lot
The Shining
The Stand
The Dead Zone
Firestarter
Cujo
THE DARK TOWER I:
The Gunslinger
Christine
Pet Sematary
Cycle of the Werewolf
The Talisman
(with Peter Straub)
It
The Eyes of the Dragon
Misery
The Tommyknockers
THE DARK TOWER II:
The Drawing
of the Three

Grateful acknowledgment is made to the following for permission to reprint copyrighted material.

Without limiting the rights under copyright reserved above, no part of this publication may be reproduced, stored in or introduced into a retrieval system, or transmitted, in any form, or by any means (electronic, mechanical, photocopying, recording, or otherwise), without the prior written permission of both the copyright owner and the above publisher of this book.

These are works of fiction. Names, characters, places, and incidents either are the product of the author’s imagination or are used fictitiously, and any resemblance to actual persons, living or dead, business establishments, events, or locales is entirely coincidental.

The publisher does not have any control over and does not assume any responsibility for author or third-party Web sites or their content.

The scanning, uploading, and distribution of this book via the Internet or via any other means without the permission of the publisher is illegal and punishable by law. Please purchase only authorized electronic editions, and do not participate in or encourage electronic piracy of copyrighted materials. Your support of the author’s rights is appreciated.

It is the tale, not he who tells it.

“I heard it through the grapevine.”

For Russ and Florence Dorr

There’s a guy like me in every state and federal prison in America, I guess—I’m the guy who can get it for you. Tailormade cigarettes, a bag of reefer if you’re partial to that, a bottle of brandy to celebrate your son or daughter’s high school graduation, or almost anything else ... within reason, that is. It wasn’t always that way.

I came to Shawshank when I was just twenty, and I am one of the few people in our happy little family willing to own up to what they did. I committed murder. I put a large insurance policy on my wife, who was three years older than I was, and then I fixed the brakes of the Chevrolet coupe her father had given us as a wedding present. It worked out exactly as I had planned, except I hadn’t planned on her stopping to pick up the neighbor woman and the neighbor woman’s infant son on their way down Castle Hill and into town. The brakes let go and the car crashed through the bushes at the edge of the town common, gathering speed. Bystanders said it must have been doing fifty or better when it hit the base of the Civil War statue and burst into flames.

I also hadn’t planned on getting caught, but caught I was. I got a season’s pass into this place. Maine has no death-penalty, but the District Attorney saw to it that I was tried for all three deaths and given three life sentences, to run one after the other. That fixed up any chance of parole I might have for a long, long time. The judge called what I had done “a hideous, heinous crime,” and it was, but it is also in the past now. You can look it up in the yellowing files of the Castle Rock Call, where the big headlines announcing my conviction look sort of funny and antique next to the news of Hitler and Mussolini and FDR’s alphabet soup agencies.

Have I rehabilitated myself, you ask? I don’t even know what that word means, at least as far as prisons and corrections go. I think it’s a politician’s word. It may have some other meaning, and it may be that I will have a chance to find out, but that is the future ... something cons teach themselves not to think about. I was young, good-looking, and from the poor side of town. I knocked up a pretty, sulky, headstrong girl who lived in one of the fine old houses on Carbine Street. Her father was agreeable to the marriage if I would take a job in the optical company he owned and “work my way up.” I found out that what he really had in mind was keeping me in his house and under his thumb, like a disagreeable pet that has not quite been housebroken and which may bite. Enough hate eventually piled up to cause me to do what I did. Given a second chance I would not do it again, but I’m not sure that means I am rehabilitated.

As I said, I’ve been the guy who can get it for you here at Shawshank for damn near forty years. And that doesn’t just mean contraband items like extra cigarettes or booze, although those items always top the list. But I’ve gotten thousands of other items for men doing time here, some of them perfectly legal yet hard to come by in a place where you’ve supposedly been brought to be punished. There was one fellow who was in for raping a little girl and exposing himself to dozens of others; I got him three pieces of pink Vermont marble and he did three lovely sculptures out of them—a baby, a boy of about twelve, and a bearded young man. He called them The Three Ages of Jesus, and those pieces of sculpture are now in the parlor of a man who used to be governor of this state.

Or here’s a name you may remember if you grew up north of Massachusetts—Robert Alan Cote. In 1951 he tried to rob the First Mercantile Bank of Mechanic Falls, and the holdup turned into a bloodbath—six dead in the end, two of them members of the gang, three of them hostages, one of them a young state cop who put his head up at the wrong time and got a bullet in the eye. Cote had a penny collection. Naturally they weren’t going to let him have it in here, but with a little help from his mother and a middleman who used to drive a laundry truck, I was able to get it for him. I told him, Bobby, you must be crazy, wanting to have a coin collection in a stone hotel full of thieves. He looked at me and smiled and said, I know where to keep them. They’ll be safe enough. Don’t you worry. And he was right. Bobby Cote died of a brain tumor in 1967, but that coin collection has never turned up.

I’ve gotten men chocolates on Valentine’s Day; I got three of those green milkshakes they serve at McDonald’s around St. Paddy’s Day for a crazy Irishman named O’Malley; I even arranged for a midnight showing of Deep Throat and The Devil in Miss Jones for a party of twenty men who had pooled their resources to rent the films ... although I ended up doing a week in solitary for that little escapade. It’s the risk you run when you’re the guy who can get it.

I’ve gotten reference books and fuck-books, joke novelties like handbuzzers and itching powder, and on more than one occasion I’ve seen that a long-timer has gotten a pair of panties from his wife or his girlfriend... and I guess you’ll know what guys in here do with such items during the long nights when time draws out like a blade. I don’t get all those things gratis, and for some items the price comes high. But I don’t do it just for the money; what good is money to me? I’m never going to own a Cadillac car or fly off to Jamaica for two weeks in February. I do it for the same reason that a good butcher will only sell you fresh meat: I got a reputation and I want to keep it. The only two things I refuse to handle are guns and heavy drugs. I won’t help anyone kill himself or anyone else. I have enough killing on my mind to last me a lifetime.

Yeah, I’m a regular Neiman-Marcus. And so when Andy Dufresne came to me in 1949 and asked if I could smuggle Rita Hayworth into the prison for him, I said it would be no problem at all. And it wasn’t.

When Andy came to Shawshank in 1948, he was thirty years old. He was a short, neat little man with sandy hair and small, clever hands. He wore gold-rimmed spectacles. His fingernails were always clipped, and they were always clean. That’s a funny thing to remember abo...

Each of the four stories, markedly different in tone and subject, present a journey: Rita Hayworth and Shawshank Redemption (Hope Springs Eternal) is a tale of an innocent man who devises an exciting escape from prison; The Apt Pupil (Summer of Corruption) is the story of a golden schoolboy and an old man with a hideous past who join in a dreadful union; in The Body (Fall from Innocence), four young boys venture into the woods and find life, death and the end of innocence and The Breathing Method (A Winter's Tale) is a macabre story told in a strange club of a woman determined to give birth...no matter what.

Description du livre Paperback. Etat : Very Good. The book has been read, but is in excellent condition. Pages are intact and not marred by notes or highlighting. The spine remains undamaged. N° de réf. du vendeur GOR001836530

Description du livre Paperback. Etat : Good. The book has been read but remains in clean condition. All pages are intact and the cover is intact. Some minor wear to the spine. N° de réf. du vendeur GOR002193911

Description du livre Paperback. Etat : Fair. A readable copy of the book which may include some defects such as highlighting and notes. Cover and pages may be creased and show discolouration. N° de réf. du vendeur GOR002506990

Description du livre Etat : Very Good. Shipped within 24 hours from our UK warehouse. Clean, undamaged book with no damage to pages and minimal wear to the cover. Spine still tight, in very good condition. Remember if you are not happy, you are covered by our 100% money back guarantee. N° de réf. du vendeur 6545-9780340952603

Description du livre Etat : Very Good. This book is in very good condition and will be shipped within 24 hours of ordering. The cover may have some limited signs of wear but the pages are clean, intact and the spine remains undamaged. This book has clearly been well maintained and looked after thus far. Money back guarantee if you are not satisfied. See all our books here, order more than 1 book and get discounted shipping. . N° de réf. du vendeur 7719-9780340952603