Articles liés ŕ In the Balance (Worldwar, Book One)

Turtledove, Harry In the Balance (Worldwar, Book One)

In the Balance (Worldwar, Book One) 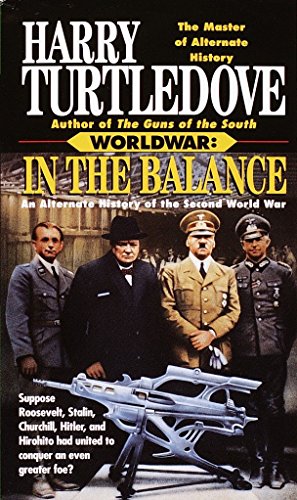 Fleetlord Atvar strode briskly into the command station of the invasion fleet bannership 127th Emperor Hetto. Officers stiffened in their seats as he came in. But for the way his eye turrets swiveled in their sockets, one to the left, the other to the right, he ignored them. Yet had any been so foolish as to omit the proper respect, he would have noticed—and remembered.

Shiplord Kirel, his body paint less elaborate only than Atvar’s, joined him at the projector. As Atvar did every morning, he said, “Let us examine the target.” Kirel served the fleetlord by touching the control with his own index claw. A blue and gray and white sphere sprang into being, a perfect representation of a life-bearing world floating in space.

All the officers turned both eyes toward the hologram. Atvar, as was his custom, walked around the projector to view it from all sides: Kirel followed him. When they were back where they had begun, Atvar ran out a bifurcated tongue. “Cold-looking place,” the fleetlord said, as he usually did. “Cold and wet.”

“Yet it will serve the Race and the Emperor,” Kirel replied. When he spoke those words, the rest of the officers returned to their assigned tasks; the morning ritual was over. Kirel went on, “Pity such a hot white star as Tosev has hatched so chilly an egg.”

“Pity indeed,” Atvar agreed. That chilly world revolved around a star more than twice as bright as the sun under which he’d been raised. Unfortunately, it did so toward the outer edge of the biosphere. Not only did Tosev 3 have too much free water, it even had frozen water on the ground here and there. In the Empire’s three current worlds, frozen water was rare outside the laboratory.

Kirel said, “Even if Tosev 3 is colder on average than what we’re used to, Fleetlord, we won’t have any real trouble living there, and parts will be very pleasant.” He opened his jaws slightly to display small, sharp, even teeth. “And the natives should give us no difficulty.”

“By the Emperor, that’s true.” Though his sovereign was light-years away, Atvar automatically cast both eyes down to the floor for a moment. So did Kirel. Then Atvar opened his jaws, too, sharing the shiplord’s amusement. “Show me the picture sequence from the probe once more.”

“It shall be done.” Kirel poked delicately at the projector controls. Tosev 3 vanished, to be replaced by a typical inhabitant: a biped with a red-brown skin, rather taller than a typical male of the Race. The biped wore a strip of cloth round its midsection and carried a bow and several stone-tipped arrows. Black fur sprouted from the top of its head.

The biped vanished. Another took its place, this one swaddled from head to foot in robes of dirty grayish tan. A curved iron sword hung from a leather belt at its waist. Beside it stood a brown-furred riding animal with a long neck and a hump on its back.

Atvar pointed to the furry animal, then to the biped’s robes. “Even the native creatures have to protect themselves from Tosev 3’s atrocious climate.” He ran a hand down the smooth, glistening scales of his arm.

More bipeds appeared in holographic projection, some with black skins, some golden brown, some a reddish color so light it was almost pink. As the sequence moved on, Kirel opened his jaws in amusement once more. He pointed to the projector. “Behold—now!—the fearsome warrior of Tosev 3.”

“Hold that image. Let everyone, look closely at it,” Atvar commanded.

“It shall be done.” Kirel stopped the flow of images. Every officer in the command station swiveled one eye toward the image, though most kept the other on the tasks before them.

Atvar laughed silently as he studied the Tosevite fighter. This native belonged to the pinkish race, though only one hand and his face were visible to testify to that. Protective gear covered the rest of him almost as comprehensively as had the earlier biped’s robes. A pointed iron helmet with several dents sat on top of his head. He wore a suit of rather rusty mail that reached almost to his knees, and heavy leather boots below them. A flimsy coat of bluish stuff helped keep the sun off the mail.

The animal the biped rode, a somewhat more graceful relative of the humped creature, looked bored with the whole business. An iron-headed spear projected upward from the biped’s seat. His other armament included a straight sword, a knife, and a shield with a cross painted on it.

“How well do you think his kind is likely to stand up to bullets, armored fighting vehicles, aircraft?” Atvar asked rhetorically. The officers all laughed, looking forward to an easy conquest, to adding a fourth planet and solar system to the dominions of the Emperor.

Not to be outdone in enthusiasm by his commander, Kirel added, “These are recent images, too: they date back only about sixteen hundred years.” He paused to poke at a calculator. “That would be about eight hundred of Tosev 3’s revolutions. And how much, my fellow warriors, how much can a world change in a mere eight hundred revolutions?”

The officers laughed again, more widely this time. Atvar laughed with them. The history of the Race was more than a hundred thousand years deep; the Ssumaz dynasty had held the throne for almost half that time, ever since techniques for ensuring male heirs were worked out. Under the Ssumaz Emperors, the Race took Rabotev 2 twenty-eight thousand years ago, and seized Halless 1 eighteen thousand years after that. Now it was Tosev 3’s turn. The pace of conquest was quickening, Atvar thought.

“Carry on, servants of the Emperor,” the fleetlord said. The officers stiffened once more as he left the command station.

He was back in his suite, busy with the infinite minutiae that accompanied command, when his door buzzer squawked. He looked up from the computer screen with a start. No one was scheduled to interrupt him at this time, and the Race did not lightly break routine. Emergency in space was improbable in the extreme, but who would dare disturb him for anything less?

The junior officer who came into the suite looked nervous; his tail stump twitched and his eyes swiveled quickly, now this way, now that, as if he were scanning the room for danger. “Exalted Fleetlord, kinsmale of the Emperor, as you know, we draw very near the Tosev system,” he said, his voice hardly louder than a whisper.

“I had better know that,” Atvar said with heavy sarcasm.

“Y-yes, Exalted Fleetlord.” The junior officer, almost on the point of bolting, visibly gathered himself before continuing: “Exalted Fleetlord, I am Subleader Erewlo, in the communications section. For the past few ship’s days, I have detected unusual radio transmissions coming from that system. These appear to be artificial in nature, and, and”—now he had to force himself to go on and face Atvar’s certain wrath—“from tiny doppler shifts in the signal frequency, appear to be emanating from Tosev 3.”

In fact, the fleetlord was too startled to be furious. “That is ridiculous,” he said. “How dare you presume to tell me that the animal-riding savages our probes photographed have moved in the historic swivel of an eye turret up to electronics when we required tens of millennia for the same advance?”

“Exalted Fleetlord, I presume nothing,” Erewlo quavered. “I merely report to you anomalous data which may be of import to our mission and therefore to the Race.”

“Get out,” Atvar said, his voice flat and deadly dangerous. Erewlo fled.

The fleetlord glared after him. The report was ridiculous, on the face of it. The Race changed but slowly, in tiny, sensible increments. Though both the Rabotevs and the Hallessi were conquered before they developed radio, they had had comparably long, comparably leisurely developments. Surely that was the norm among intelligent races.

Atvar spoke to his computer. The data the subleader had mentioned came up on his screen. He studied them, asked the machine for their implications. The implications were as Erewlo had said: with a probability that approached one, those were artificial radio signals coming from Tosev 3.

The fleetlord snarled a command the computer was not anatomically equipped to obey. If the natives of Tosev 3 had somehow stumbled across radio, what else did they know?

Harry Turtledove is the award-winning author of the alternate-history works The Man with the Iron Heart, The Guns of the South, and How Few Remain (winner of the Sidewise Award for Best Novel); the Hot War books: Bombs Away, Fallout, and Armistice; the War That Came Early novels: Hitler’s War, West and East, The Big Switch, Coup d’Etat, Two Fronts, and Last Orders; the Worldwar saga: In the Balance, Tilting the Balance, Upsetting the Balance, and Striking the Balance; the Colonization books: Second Contact, Down to Earth, and Aftershocks; the Great War epics: American Front, Walk in Hell, and Breakthroughs; the American Empire novels: Blood and Iron, The Center Cannot Hold, and Victorious Opposition; and the Settling Accounts series: Return Engagement, Drive to the East, The Grapple, and In at the Death. Turtledove is married to fellow novelist Laura Frankos. They have three daughters—Alison, Rachel, and Rebecca—and two granddaughters, Cordelia Turtledove Katayanagi and Phoebe Quinn Turtledove Katayanagi.

1. In the Balance: An Alternate History of the Second World War (Worldwar, Volume 1)

2. In the Balance: An Alternate History of the Second World War (Worldwar, Volume 1)

3. In the Balance: An Alternate History of the Second World War (Worldwar, Volume 1)

4. In the Balance (Paperback or Softback)

5. In the Balance: An Alternate History of the Second World War (Worldwar, Volume 1)

6. In the Balance: An Alternate History of the Second World War (Worldwar, Volume 1)

7. In the Balance: An Alternate History of the Second World War (Worldwar, Volume 1)

8. In the Balance: An Alternate History of the Second World War (Worldwar, Volume 1)

9. In the Balance: An Alternate History of the Second World War (Worldwar, Volume 1)

10. In the Balance: An Alternate History of the Second World War (Worldwar, Volume 1)