Articles liés ŕ Who: The A Method for Hiring

Smart, Geoff; Street, Randy Who: The A Method for Hiring

Who: The A Method for Hiring 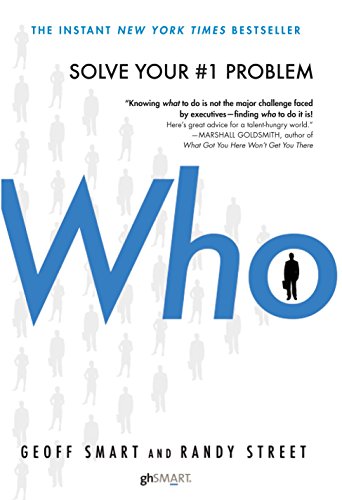 Who This essential business book provides a simple and practical solution to every manager's top problem: unsuccessful hiring. The authors' methods for hiring are broken down into easy-to-follow steps that guarantee hiring success. Full description

Remember the I Love Lucy episode where Lucy and Ethel find work at a candy factory? They’re supposed to be wrapping chocolates, but they can’t keep up with the pace. So instead of letting the candy pass them by, they start shoving it into their mouths, down their shirts, and anywhere else it will fit. That’s when a supervisor looks in and congratulates the new hires on the empty conveyor belt. Then she calls to someone in the next room, “Speed it up!” And with that the chaos really ensues.

You could spend countless hours trying to optimize the line, but that wouldn’t get to the heart of the matter. The supervisor didn’t have a conveyor problem. She had a Lucy problem.

The Lucy problem is a who problem, but chances are yours is neither as funny nor so far down the chain of command. As an engineering friend of ours often laments, “Managing is easy, except for the people part!”

In an October 2006 cover story, “The Search for Talent,” The Economist reported that finding the right people is the single biggest problem in business today.* We doubt that surprised most readers. The fact is, virtually every manager struggles to find and hire the talent necessary to drive his or her business forward.

We’ve all been there. We’ve all heard the horror stories of the CEO who sank a multibillion-dollar public company, the district manager who allowed his region to fall behind competition, even the executive assistant who couldn’t keep a schedule. Most of us have lived those stories and could add dozens more to the list.

Even we have made bad who decisions. A few years back, Geoff and his wife hired a nanny we’ll call Tammy to look after their children. Unfortunately, Geoff had what his six-year-old calls a “space-out moment” and neglected to apply the method this book describes when he hired her.

Not many months later, Geoff was on the phone in his home office when he saw his two-year-old running naked down the driveway. He immediately hung up on his client and raced outdoors to stop his daughter before she ran into the street. Fortunately, the FedEx truck was not barreling up the driveway at that moment.
Then Geoff went looking for Tammy to find out what had happened. All she could say was, “Well, it’s hard to keep track of all of the kids.” It is, but as Geoff explained to her, that’s exactly what she had been hired to do. Sometimes a who problem can mean life or death.

Needless to say, Geoff’s next nanny search commenced immediately, involved the method presented in this book, and resulted in a much better hire.

The fact is, all of us let our who guard down sometimes. We realize how inflated resumes can be. Yet we accept at face value claims of high accomplishment that we know better than to fully trust. Due diligence, after all, takes time, and time is the one commodity most lacking in busy managers’ lives.
George Buckley grew up with adoptive parents in a boardinghouse in a rough part of Sheffield, England, went to a school for physically handicapped children, and worked his way up to becoming the successful CEO of two Fortune 500 companies, including 3M, where he works now. It’s the sort of background that breeds a healthy skepticism about resumes.

When we met with Buckley, he got straight to the point: “One of the hardest challenges is to hire people from outside the company. One of the basic failures in the hiring process is this: What is a resume? It is a record of a person’s career with all of the accomplishments embellished and all the failures removed.”

Jay Jordan, CEO of the Jordan Company, told us how he once hired a candidate who looked great on paper but failed in the role. The executive demanded some feedback from Jordan on the day of his termination. Jordan didn’t want to add insult to injury, but finally couldn’t stop himself from saying, “Look, I hired your resume. But unfortunately, what I got was you!”

Due diligence is also lacking in what Kelvin Thompson, a top executive recruiter with Heidrick & Struggles, calls “the worst mistake boards make–the ‘la-di-da’ interview: nice lunch, nice chat. They say this is a CEO, and we cannot really interview them. So you have a board who never really interviews the candidates.”

The techniques you will learn in the pages that follow will help everyone–boards, hiring managers at every level, even parents hiring a nanny–find the right who for whatever position needs filling. The method will do the due diligence for you. It lets you focus on the individual candidates without losing sight of the goals and values of your organization.

Before our method can work to its optimal level, though, chances are you might have to break some bad hiring habits of your own.

“Seventy percent of the game is finding the right people, putting them in the right position, listening to them, and alleviating what gets in their way. Who is a practical guide to making sure you get the right people to start with! Excellent advice and guide.”–Robert Gillette, president and CEO, Honeywell Aerospace

“Geoff Smart and Randy Street have done an amazing job distilling the best advice from some of the world’s most successful business leaders.”–Wayne Huizenga, founder, Blockbuster Video

“A great read–it really is all about finding, keeping, and motivating the team.” –John Malone, chairman, Liberty Media Corporation

“The key point in this book is that those of us who run companies should include who decisions near the top of the list of strategic priorities.”–John Varley, group chief executive, Barclays

“Who is the only book you need to read if you are serious about making smart hiring and promotion decisions. It is the most actionable book on middle- and upper-management hiring that I’ve read after twenty years in HR.”–Ed Evans, executive vice president and chief personnel officer, Allied Waste Industries

“I wish I had this book thirty years ago, at the beginning of my career!”–Jay Jordan, chairman and CEO, the Jordan Company

“This book will save you and your company time and money. In business, what else is there?”–Roger Marino, co-founder, EMC Corporation

“You’ ll find yourself nodding yes, saying ‘That’s right,’ and thinking, Oh, I’ve been there, all the way through this grand slam of a book. Whether you’re starting a company or running a part of a big one, the level of success you achieve is almost always a result of choosing the right people for the right jobs at the right time. It’s all about the who!”–Aaron Kennedy, founder and chairman, Noodles & Company

Who: The A Method for Hiring (Hardback)

Description du livre Hardback. Etat : New. Language: English. Brand new Book. In this instant New York Times Bestseller, Geoff Smart and Randy Street provide a simple, practical, and effective solution to what The Economist calls "the single biggest problem in business today" unsuccessful hiring. The average hiring mistake costs a company $1.5 million or more a year and countless wasted hours. This statistic becomes even more startling when you consider that the typical hiring success rate of managers is only 50 percent. The silver lining is that "who" problems are easily preventable. Based on more than 1,300 hours of interviews with more than 20 billionaires and 300 CEOs, Who presents Smart and Street's A Method for Hiring. Refined through the largest research study of its kind ever undertaken, the A Method stresses fundamental elements that anyone can implement-and it has a 90 percent success rate. Whether you're a member of a board of directors looking for a new CEO, the owner of a small business searching for the right people to make your company grow, or a parent in need of a new babysitter, it's all about Who. Inside you'll learn how to - avoid common "voodoo hiring" methods- define the outcomes you seek- generate a flow of A Players to your team-by implementing the #1 tactic used by successful businesspeople- ask the right interview questions to dramatically improve your ability to quickly distinguish an A Player from a B or C candidate- attract the person you want to hire, by emphasizing the points the candidate cares about most In business, you are who you hire. In Who, Geoff Smart and Randy Street offer simple, easy-to-follow steps that will put the right people in place for optimal success. N° de réf. du vendeur AA99780345504197

Who: The A Method for Hiring