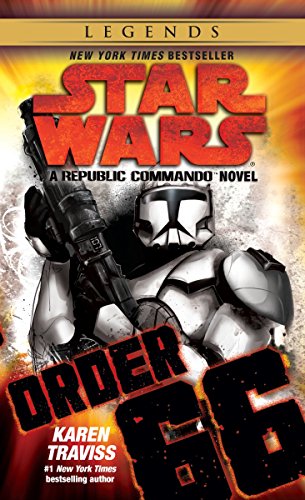 So that’s how I once looked. We should all see ourselves from a stranger’s perspective at least once in our lives. There’s a Jedi walking toward me, all brown robes and earnest piety; no braid, so despite his youth he’s not a Padawan any longer. He’ll be commanding troops. At the very least, he’ll be on active service on his own. The war makes us veterans before our time.

I want to grab him by the shoulders and ask if he thinks this is a just war, a war fought honorably, but he’ll panic if a Mandalorian in full armor accosts him–especially one he’ll sense is a Force-user like himself. Nobody else is taking much notice of me. Mandalorians on Coruscant are just foreigners, bounty hunters, one more bunch of economic migrants out of the many thousands of species who flock to the galaxy’s capital.

Ah, the Jedi’s looking around the crowd. He can sense me. I’m lost in the crowd of shoppers and sightseers. It’s very strange–obscene, even–to see everyone going about their business on Coruscant as if we’re not in the second year of an ugly war. And for them, of course, they’re not. It’s someone else’s war in every sense–fought on other worlds, fought by other beings, fought by men who aren’t Coruscant citizens. Clone troopers aren’t anyone’s citizens. They have no legal rights. They’re objects. Chattel. Military assets.

Nobody should stand back and let that happen, least of all a Jedi.

I’m just a few meters from the Jedi now. He’s so serious, so committed.Yes, that was me, just months ago.

A passerby glances his way and I sense her unease. When I walked around the city in my robes, I thought that others saw me as someone there to help them. Now I know different; they probably saw someone they didn’t trust, with powers they didn’t understand, someone they didn’t elect but who shaped their lives behind the scenes anyway.

If they’d known how much I could shape their thoughts, too, they’d have fled from me.

The Jedi passes close by, but I still don’t recognize him. He stares into the T-slit of my helmet as if I’ve grabbed him. I can feel his confusion as I walk on by–no, not just confusion: fear. A Force-using Mandalorian has to be on his list of worst nightmares.

There was a time when it was on mine, too. Funny, that. Then I sense him turn. I feel him working his way back through the crowd toward me, burning with questions. Before he reaches out to tap my shoulder–and I have to give him credit for even trying–I turn to face him.

He flinches. What he sees doesn’t match what he can feel.

Is it that obvious? To a Jedi, yes, it is. I used to be Bardan Jusik. Everyone in the Jedi Order knows I finally went native. It’s the only response I know; complete surrender to a way of life–first Jedi, now Mandalorian–with every fiber of my being. My Jedi Masters didn’t raise me to live my life by halves.

“You walked out on us in the middle of a war–a war we have to fight.” He’s puzzled, resentful–scared. “How could you betray us like that?”

I wonder who he means by we: Jedi, or clones?

“I left because it’s wrong.” I shouldn’t have to tell him that. “Because you’re using a slave army to do it. Because there’s no point fighting one kind of evil if you replace it with your own brand.” Get specific. Get personal. Don’t give him a chance to look away from his conscience. “You, personally. You make that choice each morning. A belief you suspend when it suits you isn’t a belief. It’s a lie.”

Oh, that stung. I feel his soul squirm.

“I don’t like it any more than you do.” He seems oblivious of the stares of passersby. “But if I walk out, it won’t change the Council’s policy, or the course of the war.”

“It’ll change your war,” I say. “But I suppose you’re only following orders. Right?”

Everything that has happened in the galaxy–everything that ever will happen–is framework made up of countless connections of individual choices: yes or no, kill or spare, survive or die. They shape every moment for all eternity. One man’s decision matters. One being’s choices, moment by moment, connected to a network of billions of other choices, is all that existence is.

“We need every general we can muster,” he says. Maybe the Jedi thinks he can appeal to my sense of guilt. “There’s a terrible darkness coming. I can feel it.”

It’s vague and unfathomable, but it’s there, looming, like someone stalking me. “Then do something about your own darkness.”

“Like joining a gang of mercenaries?” He looks over my armor with evident disgust. “Thugs. Savages.”

“Before you choke on your own piety, Jedi, ask yourself who you’re fighting for.”

Fierfek, I called him Jedi. My disconnection’s complete. His expression is one of quiet horror, and I walk away knowing I’ll never see him again, I know that. And this war will end in grief; I know that, too.

I’ve made my choice. Unlike the clone troopers, I have one. And I choose to let the galaxy look after itself, and save those men that the rest of the civilized world relegates to the status of beasts. It’s the right thing to do. It’s what a Jedi should do.

The day of reckoning is coming. Yes, I can feel that, as well. I can’t stop it, whatever it is; but I can defend those dearest to me.

Choices. I had one. I made it.

The Clone Wars rage to their bloody climax. Treachery reigns. Treason takes courage. Commandos, Jedi, and the entire Galactic Republic must face the end of life as they know it . . . and the dreaded dawn of a new empire.

Even as the Clone Wars are about to reach an explosive climax, no one knows whether victory will favor the Grand Army of the Republic (GAR) or the Separatists. But no matter who wins, the stakes are highest for elite Special Ops clones like the Republic Commandos in Omega and Delta squads–and the notorious renegade Advance Recon Commando troopers known as Null ARCs. And now even the deadliest weapon may not be powerful enough to defeat the real menace: the apocalyptic horror to be unleashed when Palpatine utters the chilling words The time has come. Execute Order 66. Translation: The Jedi have tried to stage a coup, and all must be shot on sight.

With their faith in the Republic and their loyalty to their Jedi allies put to the ultimate test, how will the men of Omega and Delta squads react to the most infamous command in galactic history?