Jance, J. A Paradise Lost: A Novel of Suspense

Paradise Lost: A Novel of Suspense 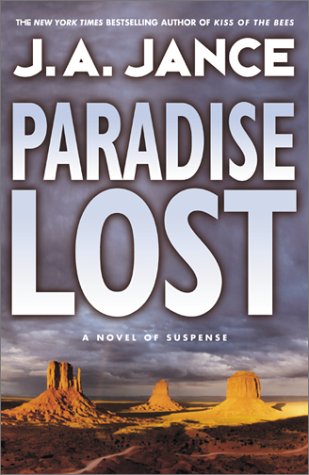 J.A. Jance returns us to a world of desolate beauty and lonely terror in an extraordinary new novel as heartbreaking and real as it is grippingly intense.

Dora Matthews and Jennifer Brady, both thirteen, couldn't be less alike -- yet the luck of the draw has made them tentmates at a Girl Scout Memorial Day weekend camping trip at Apache Pass. Dora is a wild child, a pregnant, fatherless waif with a missing junkie mother. Jenny is the innocent daughter of Joanna Brady, the sheriff of Cochise County, Arizona. In the cool blackness of the high desert night, they slip away at Dora's prodding. What they find on their unauthorized hike will change their lives forever: the body of a murdered Phoenix heiress, abandoned to scavengers and the elements.

Sheriff Brady fears the traumatic damage that her daughter's grim discovery may have inflicted on the frightened teenager. Now, however, Joanna's foremost concern is the job she was elected to do, and she sets out on the trail of the dead woman's lowlife husband, who cleaned out their accounts before he vanished.

The stakes get drastically higher in very short order when something happens to poor damaged and neglected Dora Matthews that hits Joanna like a runaway truck. Someone believes that the two girls who were where they shouldn't have been two nights earlier are now loose ends that need to be tied up. And Joanna's own Jenny may very well be the next item on a killer's bloody agenda.

"Brady comes into her own in this book...making an already appealing character even more so." (St Louis Post-Dispatch)

"The plotting is up to Jance's high standards...bracing." (Cleveland Plain-Dealer)

"[A] page turner...builds suspense and throws in some surprises as well. Jance's sense of place remains strong." (Publishers Weeekly)

"J.A. Jance is among the best--if not the best--mystery novelists writing today." (Chattanooga Times)

"In the elite company of Sue Grafton and Patricia Cornwell." (*Flint Journal)

Description du livre Hardcover. Etat : New. Etat de la jaquette : New. 1st Edition. FIRST EDITION/FIRST PRINTING with a complete number line beginning in 1. NEW & UNREAD - SPINE HAS NOT BEEN CRACKED - no flaws or defects - Hardcover in Dust Jacket as issued. DUST JACKET IN PROTECTIVE BRODART COVER - A VERY COLLECTIBLE COPY OF THIS BOOK - PHOTOS OF THE ACTUAL BOOK SENT UPON REQUEST. The boards Are Clean, Not Bumped. Fore Edges Are Clean. Dust Jacket Is In Fine Condition. No Chipping, Crinkles, or tears. Not Price Clipped. All books are boxed and shipped with bubble wrap - ALL BOOKS HAVE BEEN BOXED IN CLIMATE CONTROLLED STORAGE AND HAVE NOT BEEN TOUCHED BY ANY OTHER HUMAN THAN ME FOR AT LEAST THE LAST 10 YEARS - ALL BOOKS ARE SEALED AND BUBBLE WRAPPED AND SHIPPED IN BOXES - YOU CAN BUY HERE WITH CONFIDENCE KNOWING THAT A BUNCH OF STRANGERS HAVE NOT HANDLED YOUR BOOK -. NḞ de réf. du vendeur 006891