Chappell Warren Moby-Dick: Or- the Whale

Moby-Dick: Or- the Whale 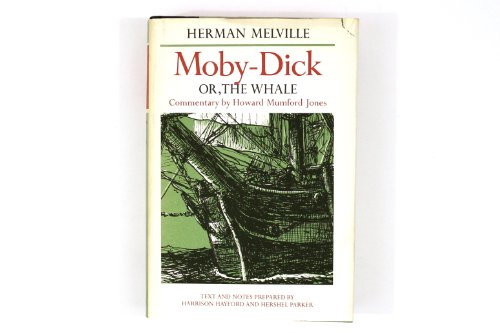 Call me Ishmael. This resonant opening of Moby-Dick, the greatest novel in American literature, announces the narrator, Herman Melville, as he with a measure of slyness thought of himself. In the Scriptures Ishmael, a wild man sired by the overwhelming patriarch Abraham, was nevertheless the bastard son of a serving girl Hagar. The author himself was the offspring of two distinguished American families, the Melvilles of Boston and the Gansevoorts of Albany.

Melville's father cast something of a blight on the family escutcheon by his tendency to bankruptcy which passed down to his son. Dollars damn me, the son was to say over and over. When he sat down in the green landscape of Pittsfield, Massachusetts, to compose Moby-Dick he was in debt, the father of one son, and another to be born a few days after the publication of the novel in England.

Melville had published five novels previous to Moby-Dick; the first two did well, and then with the capriciousness of the public the subsequent novels failed to please. He was a known literary figure with a fading reputation. How he came upon the courage to undertake the challenging creation of the epical battle between a sea creature, a white whale called Moby Dick, and an old captain from Nantucket by the name of Ahab is one of literature's triumphant mysteries. Add to that, as one reads, that he was only thirty-two years old.

Ten years before, in 1841, he had signed up as a common seaman on the whaling vessel Acushnet bound for the South Seas. Young Ishmael was drawn by the lure of the sea and by the wonder of the whale itself, the Leviathan, the monarch of the deep, "one grand hooded phantom, like a snow hill in the air." Until the discovery of petroleum oil in 1859 and Thomas Edison's invention of the incandescent lamp in 1879, whaling was a major commercial occupation in New England. Fortunes were made, grand houses were built, often with a "widow's walk" on the roof that testified to the great dangers of the enterprise. For the crew, service on a whaler was a drastic life of unremitting labor; foul, crowded quarters; bad food in scanty servings; contractual terms for years at miserable wages; brutalized companions picked up from all the ports of the world; tyrannical captains practicing a "sultanism" which Melville abhorred. A ship afloat is after all a prison. Melville was on three whalers in his four years at sea and from each, as we read in Typee and Omoo, the struggle is to escape, as he did when the boats anchored near exotic islands. He wrote about the misery of the whaling life, but not about whaling itself until he came to Moby-Dick. His imaginary whaler, the Pequod, death bound as it is, would be called, for an ordinary seaman, an agreeable berth. Ahab has no interest left beyond his internal struggle with one whale.

Still, there is whaling, the presumption of it. When a whale is sighted small boats are detached from the main vessel and the men engage in a deadly battle to try to match, with flying harpoons, the whale's immense strength and desperation. If the great thing is captured, the deck of the main ship becomes an abattoir of blood and guts. The thick blubber is to be stripped, the huge head to be drained of its oils for soothing ambergris, for candles; the bones of the carcass make their way into corsets and umbrellas and scrimshaw trinkets. Moby-Dick is a history of cetology, an encylopedic telling of the qualities of the fin-back, the right whale, the hyena whale, the sperm whale, the killer whale, classified by size in mock academic form as folio, octavo, and so on.

Information about a vanished world is one thing, but, above all else, this astonishing book is a human tragedy of almost supernatural suspensiveness, written in a rushing flow of imaginative language, poetical intensity, metaphor and adjective of consuming beauty. It begins on the cobbled streets of New Bedford, where Ishmael is to spend a few days before boarding the Pequod in Nantucket. The opening pages have a boyish charm as he is brought to share a bed with a fellow sailor, the harpooner Queequeg, an outrageously tattoed "primitive" who will be his companion throughout the narrative. Great ships under sail gave the old ports a rich heritage of myth, gossip, exaggeration, and rhetorical flights. Ishmael, on a Sunday, visits a whaleman's chapel to hear the incomparable sermon by Father Mapple on Jonah and the whale, a majestic interlude, one of many in this torrential outburst of fictional genius.

As Ishmael and Queequeg proceed to Nantucket, the shadows of the plot begin to fall upon the pages. The recruits are interviewed by two retired sailors who will struggle to express the complicated nature of Captain Ahab. We learn that he has lost a leg, chewed off by a whale, and thus the fated voyage of the Pequod begins. Ahab has lost his leg to a white whale Moby Dick and is consumed with a passion for retribution. He will hunt the singular whale as a private destiny in the manner of ancient kings in a legendary world. However, Ahab is real and in command. The chief mate, Starbuck, understands the folly of the quest, the danger of it, and, as a thoughtful man longing to return to his wife and children, he will speak again and again the language of reason. "Vengeance on a dumb beast that simply smote thee from the blindest instinct! Madness! To be enraged with a dumb thing, Captain Ahab, seems blasphemous."

The necessity of Starbuck's human distance from the implacable imperative of Ahab's quest illustrates the brilliant formation of this harrowing tale. But it is Ahab's story, his destiny, and, if on the one hand, he is a shabby, sea-worn sailor long mesmerized by mercurial oceans, he too has a wife at home and a child of his old age. We learn, as the story proceeds, that on a time ashore after his terrible wounding, he had fallen and by way of his whalebone leg been unmanned. He has suffered an incapacity not to be peacefully borne by one who in forty years had spent only three on land. Ahab knows the wild unsuitability of his nature, his remove from the common life.

Winner of the 2012 Fifty Books/Fifty Covers show, organized by Design Observer in association with AIGA and Designers & Books

"[Penguin Drop Caps] convey a sense of nostalgia for the tactility and aesthetic power of a physical book and for a centuries-old tradition of beautiful lettering."
—Fast Company

"The Penguin Drop Caps series is a great example of the power of design. Why buy these particular classics when there are less expensive, even free editions of Great Expectations? Because they’re beautiful objects. Paul Buckley and Jessica Hische’s fresh approach to the literary classics reduces the design down to typography and color. Each cover is foil-stamped with a cleverly illustrated letterform that reveals an element of the story. Jane Austen’s A (Pride and Prejudice) is formed by opulent peacock feathers and Charlotte Bronte’s B (Jane Eyre) is surrounded by flames. The complete set forms a rainbow spectrum prettier than anything else on your bookshelf."
—Rex Bonomelli, The New York Times