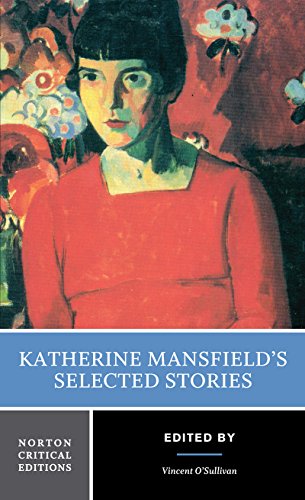 This edition includes thirty-five of Katherine Mansfield's short stories with explanatory annotations. With the exception of the first four stories, all were written within a period of ten years. These stories, and the correspondence following, reflect the urgency of a writer who knew her time was limited. All but four of the texts of the stories reprinted here are versions that Mansfield herself revised or selected. Eighteen critical essays are featured that collectively suggest the changing emphases in how Mansfield has been read by critics.

"Katherine Mansfield's Short Stories," the author captures some of the fleeting impressions we encounter daily. Some stories, like "The Garden Party", "The Doll's House", "The Daughters of the Late Colonel", accurately convey the sense of loss, the breathlessness of youth, and the regret of unfulfilled lives all in subtle yet striking prose. The beauty of Mansfield's writing lies in her poetic description of detail--her power of suggestion--and her courage. She was determined, both in her life and in her writing, to move against the current of the time. Her life was filled with problems: her health, her love life, and her writing all caused her measureless pain, but in spite of these she lived her life the way she chose to live it. There are30 stories in this very excellent Katherine Mansfield collection. Her detailed descriptions of objects are intrinsic to the stories, tiny sparkles that spread out and create a canvas on which her characters interact. Every story has its own suppressed passion as Ms. Mansfield gets right into the heart of what makes us all human. They are filled with arrivals and departures, spinsterhood and marriage, love and loss and pangs of despair. Children play a role in her writings, as do distinctions of social class. Life is a struggle for her characters, who are timeless in their humanity, though they all live in a world that existed more than 80 years ago. With rare exceptions, the stories are sad. Layered with subtleties as they deal with the major themes of life and death, "Katherine Mansfield's Short Stories" offers many small slices of life, rare glimpses into human nature with sharp insights meant to spark memories and feelings in the reader, all while providing a deeply enriching literary experience.

Katherine Mansfield (1888–1923) was a prominent modernist writer of short fiction who was born and brought up in colonial New Zealand and wrote under the pen name of Katherine Mansfield, which is in itself a short form of her real name as she was born Katherine Mansfield Beauchamp. Mansfield left for Great Britain in 1908 where she encountered Modernist writers such as D.H. Lawrence and Virginia Woolf with whom she became close friends. Her stories often focus on moments of disruption and frequently open rather abruptly. Among her most well known stories are "The Garden Party," "The Daughters of the Late Colonel," and "The Fly." During the First World War Mansfield contracted tuberculosis which rendered any return or visit to New Zealand impossible and led to her death at the age of 34.