Articles liés ŕ Week on the Concord and Merrimack Rivers

Thoreau Week on the Concord and Merrimack Rivers

Week on the Concord and Merrimack Rivers 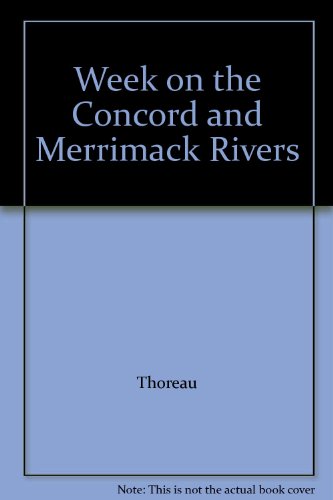 Thoreau's account of his 1839 boat trip is a finely crafted tapestry of travel writing, essays, and lyrical poetry. Thoreau interweaves descriptions of natural phenomena, the rural landscape, and local characters with digressions on literature and philosophy, the Native American and Puritian histories of New England, the Bhagavad Gita, the imperfections of Christianity, and many other subjects. Although it shares many of the themes in Thoreau's classic Walden,  A Week on the Concord offers an alternative perspective on his analaysis of the relationship between nature and culture.

Henry David Thoreau was born in Concord, Massachusetts in 1817. He graduated from Harvard in 1837, the same year he began his lifelong Journal. Inspired by Ralph Waldo Emerson, Thoreau became a key member of the Transcendentalist movement that included Margaret Fuller and Bronson Alcott. The Transcendentalists' faith in nature was tested by Thoreau between 1845 and 1847 when he lived for twenty-six months in a homemade hut at Walden Pond. While living at Walden, Thoreau worked on the two books published during his lifetime: Walden (1854) and A Week on the Concord and Merrimack Rivers (1849). Several of his other works, including The Maine Woods, Cape Cod, and Excursions, were published posthumously. Thoreau died in Concord, at the age of forty-four, in 1862.

Week on the Concord and Merrimack Rivers