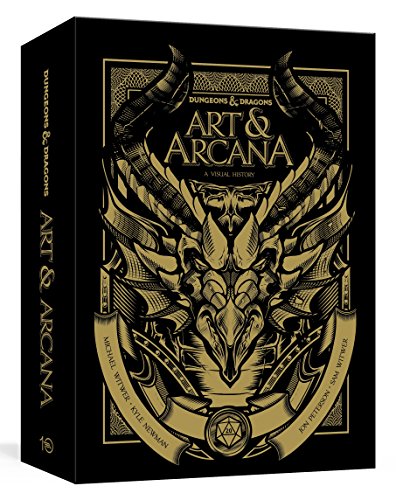 If it's true that we live in an era when it is “chic to be geek,” then Dungeons & Dragons is just about the coolest thing out there. It was, it is, and it always will be the game of the geeks, but its fandom is no longer so neatly contained. Once an esoteric diversion known only to a small but passionate group of wargamers, the game and the foundational concepts that it brought forth became among the most influential phenomena of the Information Age. The reason? The game’s earliest adopters happened to share an interest in other “geeky” things like computers, electronics, digital technologies, visual effects, filmmaking, performing arts, and beyond. These geeks grew up to develop the social and business infrastructure of the twenty-first century using concepts they had once learned on poorly lit tabletops set in dining rooms and basements. Dungeons & Dragons, according to Wired editor Adam Rogers, “allowed geeks to venture out of our dungeons, blinking against the light, just in time to create the present age of electronic miracles.” It is indeed chic to be geek, and the prophesy has finally been fulfilled: the geek shall inherit the Earth (and the parallel D&D world of Oerth).

Today, if you are one of the millions of subscribers to an MMO (massively multiplayer online game)such as World of Warcraft; a tourist in the exotic worlds of a computer role-playing franchise such as Final Fantasy or The Elder Scrolls; a virtual marksman in any first-person-shooter video game; a lover of modern fantasy television, films, or literature such as Game of Thrones; or even anyone who has ever “leveled up” in a game or rewards program, then you have Dungeons & Dragons to thank. Simply put, D&D has either directly or indirectly influenced them all. John Romero, co-creatorof the seminal first-person-shooter Doom, attributes his success to D&D, calling it “the most influential game,” adding that “the gaming concepts put forth by D&D inspired the earliest groups of gamers and computer programmers, and set into motion a revolution of creative and technical innovation.” The numbers of actors and directors who credit the game with providing them inspiration is immense, from Vin Diesel and Stephen Colbert to Rainn Wilson and the late Robin Williams. Celebrated director Jon Favreau suggested the game gave him “a really strong background in imagination, storytelling,understanding how to create tone and a sense of balance.” National Book Award–winner Ta-Nehisi Coates agrees, suggesting the game helped introduce him to “the powers of imagination.” All this is to say, the story of D&D is as important now as it has ever been, and with the recent success of 5th edition and an array of D&D-inspired blockbuster books, shows, and films surfacing, from Ready Player One to Stranger Things, its history will become increasingly visible and relevant.

Nothing conveys the story of D&D better than its visuals. At a time when fantasy and science fiction were, at best, fringe diversions, D&D was creating a culture of do-it-yourself fantasy world-building through its immersive narrative environments, given life by its ever-evolving illustrations and artwork. It depicted monsters, magic, swords, and sorcery in a way that taught fans a visual vocabulary of the unreal, fixing in the minds of a whole generation how to picture the fantastic. The relationship between Dungeons & Dragons and its artwork goes beyond symbiosis, but to outright reliance—one simply couldn’t exist without the other. The art informed the game, and the game informed the art. Beginning as amateur, homebrew sketches used to illustrate to the initiated simple concepts such as maps and the physical appearance of monsters, characters, and weapons, the art of D&D rapidly became an essential teaching tool as the game reached wider audiences less familiar with some of its fundamental concepts. The illustrations quickly had to become instructional in nature, helping players to not only conceptualize the landscapes, inhabitants, and equipment of the imagined world, but even how to use them in the context of the game. Soon the game and its fandom demanded even greater levels of sophistication—ful lcolor artwork with higher and higher levels of character andcomposition. This movement gave way to a wave of master artists who eventually developed the most important and influential fantasy art from the late 1970s to today—a collection simply unsurpassed in the fantasy genre.

The book you are holding is the dynamic story of this incredible game as told through its incomparable imagery, as well as the story of the visuals themselves. It is a carefully curated selection of art, advertising, and ephemera that we feel best represents D&D’s incredible forty-plus-year journey—a visual archive that tells a remarkable story of evolution, innovation, turmoil, perseverance, and ultimately triumph. While we expect that much of the enclosed imagery will be at least remotely familiar to D&D aficionados, the collection that follows includes numerous one-of-a-kind rarities, many of which have never been released to the public. We truly hope that you enjoy what you read and see, and that you as readers might approach this piece the same way we did—with unadulterated passion and a taste for adventure. After all, this is an adventure module of sorts, one that is intended for you personally, just as it has been for each of us. “So enjoy, and may the dice be good to you!”

“This tome invites the reader through every stage of the evolution of this wonderful game, engaging with incredible art, enlightening photos, and insightful anecdotes that both inform and inspire. Whether you got to experience the birth of DUNGEONS & DRAGONS and want to relive that origin spark, or are new to the community and would love to adventure through the visual chronicle of its past, present, and future... I cannot recommend this book enough.”
—Matthew Mercer, Dungeon Master of Critical Role

“This is the most comprehensive, mind-blowing visual history ever created about DUNGEONS & DRAGONS. Beyond the iconic artwork featured on nearly every page, the book actually serves as a complete history of the entire D&D universe. Both fans of the game and newcomers will be completely blown away by the countless hours of research and passion put into this book. There’s truly nothing else out there like it.”
—Adam F. Goldberg, creator of The Goldbergs

“This is the definitive collection of DUNGEONS & DRAGONS artwork we’ve been waiting for all of our lives! The images contained in this book will instantly transport you back to your childhood, and conjure up memories of long forgotten adventures shared with old friends around the gaming table. This tome is an essential addition to every lifelong D&D fan's home library. Buy a copy right now—or make me a saving throw versus Death Magic!”
—Ernie Cline, author of Ready Player One

“DUNGEONS & DRAGONS has shaped the imaginations of millions around the world since its conception. This visual exploration delving into where it all began is a must-read for both dedicated veterans and new enthusiasts alike. A passionate homage from the biggest fans in the industry!”
—Maude Garrett, TV, radio, and online host and founder of Geek Bomb

“I grew up during the early days of DUNGEONS & DRAGONS, and it’s been decades since I’ve seen the wonders that enthralled me during that magical time. At last, familiar treasures from the depths of the vault are here. They can make you cry depending on how deep you went. This is an incredible tome of power."
—John Romero, co-creator of DOOM

“This is a time machine. Poring over these images forty years after I first held the Basic Set in my hands, I’m overwhelmed by the same ineffable feelings I had back in 1977.  DUNGEONS & DRAGONS unlocked something in my twelve year old brain—an exhilarating sense of possibility—that set my future course as a game designer and writer. This book inspires me all over again"
—Amy Hennig, creator of the Uncharted series

“This fascinating deep dive into the world of DUNGEONS & DRAGONS will thrill both the connoisseur of role-playing games, as well as anyone interested in visual histories. I found so much information to inspire daydreams for months. I can’t wait to add this to my library of all things geeky.”
—Deborah Ann Woll, actor and D&D enthusiast

"This tome of awesomeness [...] You can only begin to imagine the amounts of hours that this team of top notch authors poured into this. They gained unparalleled access to the archives of Wizards of the Coast and the personal collection of some of the top collectors. Needless to say this book will detail and illustrate the long and wonderful journey of Dungeons and Dragons from its humble beginnings to the cult status it obtained to this day. This has never been achieved in a book before making it the must-have D&D collectible."
—Fabienne Payet, Outright Geekery

“In the early 1980s, I spent lots of time working and gaming with D&D co-creator Gary Gygax during his ‘lost Los Angeles period;’ I went on to work closely with TSR until its end. For me, this is more than a book.  It’s a time machine back to a fantastic, fabulous time when anything was possible. For anyone who wants to understand the pure magic of D&D and where it came from, get this book at all costs.”
—Flint Dille, Screenwriter/Game Designer

"Can’t give a higher recommendation than the highest for this amazing book! I’ve seen the preview and I was blown away page after Page! GET THIS BOOK!"
—Stefan Pokorny, Founder and CEO of Dwarven Forge

“This book is an exotic, magical, and fun trip into the world of DUNGEONS & DRAGONS whether you’ve ever held a twelve-sided die or not.”
—James Gunn, writer-director of the Guardians of the Galaxy movie series

Description du livre Hardback. Etat : New. Language: English. Brand new Book. A deluxe, special edition package containing art prints, ephemera, and the illustrated guide to the history and evolution of the beloved role-playing game as told through the paintings, sketches, and illustrations behind its creation, growth, and continued popularity. FINALIST FOR THE HUGO AWARD - FINALIST FOR THE LOCUS AWARD - NOMINATED FOR THE DIANA JONES AWARD From one of the most iconic game brands in the world, this official DUNGEONS & DRAGONS illustrated history provides an unprecedented look at the visual evolution of the brand, showing its continued influence on the worlds of pop culture and fantasy. Inside the book, you'll find more than seven hundred pieces of artwork--from each edition of the core role-playing books, supplements, and adventures; as well as Forgotten Realms and Dragonlance novels; decades of Dragon and Dungeon magazines; and classic advertisements and merchandise; plus never-before-seen sketches, large-format canvases, rare photographs, one-of-a-kind drafts, and more from the now-famous designers and artists associated with DUNGEONS & DRAGONS. The superstar author team gained unparalleled access to the archives of Wizards of the Coast and the personal collections of top collectors, as well as the designers and illustrators who created the distinctive characters, concepts, and visuals that have defined fantasy art and gameplay for generations. This is the most comprehensive collection of D&D imagery ever assembled, making this the ultimate collectible for the game's millions of fans around the world. Contained inside a clamshell featuring original illustrations by superstar D&D artist Hydro74, this special edition includes 10 high-quality prints of classic DUNGEONS & DRAGONS artwork, as well as a pamphlet-sized, unpublished original version of the game's most infamous adventure module and deathtrap Tomb of Horrors, written by DUNGEONS & DRAGONS co-creator Gary Gygax. N° de réf. du vendeur AA99780399582752