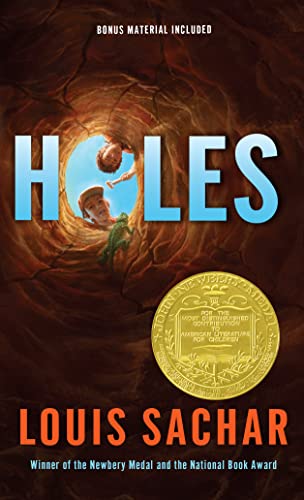 Holes Stanley's been unjustly sent to a boys' detention center where the warden makes the boys "build character" by digging holes. Stanley realizes the boys are digging holes because the warden is looking for something. But what could be buried under a dried-up lake? Full description

Stanley Yelnats was the only passenger on the bus, not counting the driver or the guard. The guard sat next to the driver with his seat turned around facing Stanley. A rifle lay across his lap.

Stanley was sitting about ten rows back, handcuffed to his armrest. His backpack lay on the seat next to him. It contained his toothbrush, toothpaste, and a box of stationary his mother had given him. He’d promised to write to her at least once a week.

He looked out the window, although there wasn’t much to see—mostly fields of hay and cotton. He was on a long bus ride to nowhere. The bus wasn’t air-conditioned, and the hot heavy air was almost as stifling as the handcuffs.

Stanley and his parents had tried to pretend that he was just going away to camp for a while, just like rich kids do. When Stanley was younger he used to play with stuffed animals, and pretend the animals were at camp. Camp Fun and Games he called it. Sometimes he’d have them play soccer with a marble. Other times they’d run an obstacle course, or go bungee jumping off a table, tied to broken rubber bands. Now Stanley tried to pretend he was going to Camp Fun and Games. Maybe he’ d make some friends, he thought. At least he’d get to swim in the lake.

He didn’ t have any friends at home. He was overweight and the kids at his middle school often teased him about his size. Even his teachers sometimes made cruel comments without realizing it. On his last day of school, his math teacher, Mrs. Bell, taught ratios. As an example, she chose the heaviest kid in the class and the lightest kid in the class, and had them weigh themselves. Stanley weighed three times as much as the other boy. Mrs. Bell wrote the ratio on the board, 3:1, unaware of how much embarrassment she had caused both of them.
Stanley was arrested later that day.
He looked at the guard who sat slumped in his seat and wondered of he had fallen asleep. The guard was wearing sunglasses, so Stanley couldn’t see his eyes.

Stanley was not a bad kid. He was innocent of the crime for which he was convicted. He’d just been in the wrong place at the wrong time.

Supposedly, he had a great-great-grandfather who had stolen a pig from one-legged Gypsy, and she put a curse on him and all his descendants. Stanley and his parents didn’t believe in curses, of course, but whenever anything went wrong, it felt good to be able to blame someone.

Things went wrong a lot. They always seemed to be in the wrong place at the wrong time.
He looked out the window at the vast emptiness. He watched the rise and fall of a telephone wire. In his mind he could hear his father’s gruff voice softly singing to him.
“If only, if only,” the woodpecker sighs,
“The bark on the tree was just a little bit softer.”
“While the wolf waits below, hungry and lonely,
He cries to the moo–oo–oon,
“If only, if only.”

It was a song his father used to sing to him. The melody was sweet and sad, but Stanley’s favorite part was when his father would howl the word “moon”.

The bus hit a small bump and the guard sat up, instantly alert.

Stanley’s father was an inventor. To be a successful inventor you need three things: intelligence, perseverance, and just a little bit of luck.

Stanley’s father was smart and had a lot of perseverance. Once he started a project he would work on it for years, often going days without sleep. He just never had any luck.

Every time an experiment failed, Stanley could hear him cursing his dirty-rotten-pig-stealing-great-great-grandfather.

Everyone in his family had always liked the fact that “Stanley Yelnats” was spelled the same frontward and backward. So they kept naming their sons Stanley. Stanley was an only child, as was every other Stanley Yelnats before him.

All of them had something else in common. Despite their awful luck, they always remained hopeful. As Stanley’s father liked to say, “ I learned from failure.”

But perhaps that was part of the curse as well. If Stanley and his father weren’t always hopeful, then it wouldn’t hurt so much every time their hopes were crushed.

“Not every Stanley Yelnats has been a failure,” Stanley’s mother often pointed out, whenever Stanley or his father became so discouraged that they actually started to believe in the curse. The first Stanley Yelnats, Stanley’ s great-grandfather, had made a fortune in the stock market. “He couldn’t have been too unlucky.”

At such times she neglected to mention the bad luck that befell the first Stanley Yelnats. He lost his entire fortune when he was moving from New York to California. His stagecoach was robbed by the outlaw Kissin' Kate Barlow.

If it weren’t for that, Stanley’s family would now be living in a mansion on a beach in California. Instead, they were crammed in a tiny apartment that smelled of burning rubber and foot odor.

The apartment smelled the way it did because Stanley’s father was trying to invent a way to recycle old sneakers. “The first person who finds a use for old sneakers, “ he said, “will be a very rich man.”

It was this lastest project that led to Stanley’s arrest.
The bus ride became increasingly bumpy because the road was no longer paved.

Actually, Stanley had been impressed when he first found out that is great-grandfather was robbed by Kissin’ Kate Barlow. True, he would have preferred living on the beach in California, but it was still kind of cool to have someone in your family robbed by a famous outlaw.

Kate Barlow didn’t actually kiss Stanley’s great-grandfather. That would have been really cool, but she only kissed the men she killed. Instead, she robbed him and left him stranded in the middle of the desert.

“He was lucky to have survived,” Stanley’s mother was quick to point out.

The bus was slowing down. The guard grunted as he stretched out his arms.

Stanley looked out the dirty window. He couldn’t see a lake.

And hardly anything was green.

Winner of the Newbery Medal and the National Book Award! This #1 New York Times bestselling, modern classic in which boys are forced to dig holes day in and day out is now available with a splashy new look.

Stanley Yelnats is under a curse. A curse that began with his no-good-dirty-rotten-pig-stealing-great-great-grandfather and has since followed generations of Yelnatses. Now Stanley has been unjustly sent to a boys’ detention center, Camp Green Lake, where the boys build character by spending all day, every day digging holes exactly five feet wide and five feet deep. There is no lake at Camp Green Lake. But there are an awful lot of holes.

It doesn’t take long for Stanley to realize there’s more than character improvement going on at Camp Green Lake. The boys are digging holes because the warden is looking for something. But what could be buried under a dried-up lake? Stanley tries to dig up the truth in this inventive and darkly humorous tale of crime and punishment—and redemption.

"A smart jigsaw puzzle of a novel." --The New York Times

Description du livre Paperback. Etat : New. Reissue. Language: English. Brand new Book. #1 NEW YORK TIMES BESTSELLER - NEWBERY MEDAL WINNER - NATIONAL BOOK AWARD WINNERDig deep in this award-winning, modern classic that will remind readers that adventure is right around the corner--or just under your feet! Stanley Yelnats is under a curse. A curse that began with his no-good-dirty-rotten-pig-stealing-great-great-grandfather and has since followed generations of Yelnatses. Now Stanley has been unjustly sent to a boys' detention center, Camp Green Lake, where the boys build character by spending all day, every day digging holes exactly five feet wide and five feet deep. There is no lake at Camp Green Lake. But there are an awful lot of holes. It doesn't take long for Stanley to realize there's more than character improvement going on at Camp Green Lake. The boys are digging holes because the warden is looking for something. But what could be buried under a dried-up lake? Stanley tries to dig up the truth in this inventive and darkly humorous tale of crime and punishment--and redemption. A smart jigsaw puzzle of a novel. --New York Times *Includes a double bonus: an excerpt from Small Steps, the follow-up to Holes, as well as an excerpt from the New York Times bestseller Fuzzy Mud. N° de réf. du vendeur LIB9780440228592