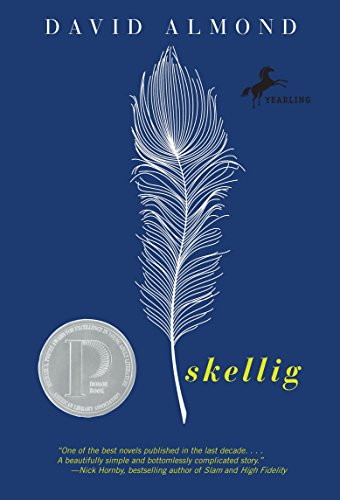 Skellig This multi-awarding winning and critically acclaimed novel is about a ten-year-old boy who finds the body of a strange beast amid the spider webs and dead flies in his crumbling garage. He and his new friend carry they create into the light. Michael's world changes forever, as he learns about nature, poetry, and the healing power of love.

I found him in the garage on a Sunday afternoon. It was the day after we moved into Falconer Road. The winter was ending. Mum had said we'd be moving just in time for the spring. Nobody else was there. Just me. The others were inside the house with Dr. Death, worrying about the baby.

He was lying there in the darkness behind the tea chests, in the dust and dirt. It was as if he'd been there forever. He was filthy and pale and dried out and I thought he was dead. I couldn't have been more wrong. I'd soon begin to see the truth about him, that there'd never been another creature like him in the world.

We called it the garage because that's what the real estate agent, Mr. Stone, called it. It was more like a demolition site or a rubbish dump or like one of those ancient warehouses they keep pulling down at the wharf. Stone led us down the garden, tugged the door open, and shined his little flashlight into the gloom. We shoved our heads in at the doorway with him.

"You have to see it with your mind's eye," he said. "See it cleaned, with new doors and the roof repaired. See it as a wonderful two-car garage."

He looked at me with a stupid grin on his face.

"Or something for you, lad-a hideaway for you and your pals. What about that, eh?"

I looked away. I didn't want anything to do with him. All the way round the house it had been the same. Just see it in your mind's eye. Just imagine what could be done. All the way round I kept thinking of the old man, Ernie Myers, that had lived here on his own for years. He'd been dead nearly a week before they found him under the table in the kitchen. That's what I saw when Stone told us about seeing with the mind's eye. He even said it when we got to the dining room and there was an old cracked toilet sitting there in the comer behind a plywood screen. I just wanted him to shut up, but he whispered that toward the end Ernie couldn't manage the stairs. His bed was brought in here and a toilet was put in so everything was easy for him. Stone looked at me like he didn't think I should know about such things. I wanted to get out, to get back to our old house again, but Mum and Dad took it all in. They went on like it was going to be some big adventure. They bought the house. They started cleaning it and scrubbing it and painting it. Then the baby came too early. And here we were.

I NEARLY GOT INTO THE GARAGE that Sunday morning. I took my own flashlight and shined it in. The outside doors to the back lane must have fallen off years ago and there were dozens of massive planks nailed across the entrance. The timbers holding the roof were rotten and the roof was sagging in. The bits of the floor you could see between the rubbish were full of cracks and holes. The people that took the rubbish out of the house were supposed to take it out of the garage as well, but they took one look at the place and said they wouldn't go in it even for extra money. There were old chests of drawers and broken washbasins and bags of cement, ancient doors leaning against the walls, deck chairs with the cloth seats rotted away. Great rolls of rope and cable hung from nails. Heaps of water pipes and great boxes of rusty nails were scattered on the floor. Everything was covered in dust and spiders' webs. There was mortar that had fallen from the walls. 'There was a little window in one of the walls but it was filthy and there were rolls of cracked linoleum standing in front of it. The place stank of rot and dust. Even the bricks were crumbling like they couldn't bear the weight anymore. It was like the whole thing was sick of itself and would collapse in a heap and have to get bulldozed away.

I heard something scratching in one of the corners, and something scuttling about; then it all stopped and it was just dead quiet in there.

I stood daring myself to go in.

"Michael! What you doing?"
She was at the back door.
"Didn't we tell you to wait till we're sure it's

I stepped back and looked at her.
"Well, didn't we?" she shouted.
"Yes," I said.
"So keep out! All right?"
I shoved the door and it lurched half shut on its
single hinge.
"All right?" she yelled.
',All right,” said. "Yes. All right. All right."
"Do you not think we've got more to worry about than stupid you getting crushed in a stupid garage?

"Yes."
"You just keep out, then! Right?"
"Right. Right, right, right.
Then I went back into the wilderness we called garden and she went back to the stupid baby.
From the Paperback edition.

“I grew up in a big extended Catholic family [in the north of England]. I listened to the stories and songs at family parties. I listened to the gossip that filled Dragone’s coffee shop. I ran with my friends through the open spaces and the narrow lanes. We scared each other with ghost stories told in fragile tents on dark nights. We promised never-ending friendship and whispered of the amazing journeys we’d take together.

“I sat with my grandfather in his allotment, held tiny Easter chicks in my hands while he smoked his pipe and the factory sirens wailed and larks yelled high above. I trembled at the images presented to us in church, at the awful threats and glorious promises made by black-clad priests with Irish voices. I scribbled stories and stitched them into little books. I disliked school and loved the library, a little square building in which I dreamed that books with my name on them would stand one day on the shelves.

“Skellig, my first children’s novel, came out of the blue, as if it had been waiting a long time to be told. It seemed to write itself. It took six months, was rapidly taken by Hodder Children’s Books and has changed my life. By the time Skellig came out, I’d written my next children’s novel, Kit’s Wilderness. These books are suffused with the landscape and spirit of my own childhood. By looking back into the past, by re-imagining it and blending it with what I see around me now, I found a way to move forward and to become something that I am intensely happy to be: a writer for children.”

David Almond is the winner of the 2001 Michael L. Printz Award for Kit’s Wilderness, which has also been named best book of the year by School Library Journal, Booklist, and Publishers Weekly. He has been called "the foremost practitioner in children's literature of magical realism." (Booklist) His first book for young readers, Skellig, is a Printz Honor winner. David Almond lives with his family in Newcastle, England.

Description du livre Penguin Random House Children's UK, United States, 2000. Paperback. Etat : New. Reprint. Language: English. Brand new Book. David Almond's Printz Honor-winning novel celebrates its 10th anniversary! Ten-year-old Michael was looking forward to moving into a new house. But now his baby sister is ill, his parents are frantic, and Doctor Death has come to call. Michael feels helpless. Then he steps into the crumbling garage. . . . What is this thing beneath the spiders' webs and dead flies? A human being, or a strange kind of beast never before seen? The only person Michael can confide in is his new friend, Mina. Together, they carry the creature out into the light, and Michael's world changes forever. . . . N° de réf. du vendeur ABZ9780440416029