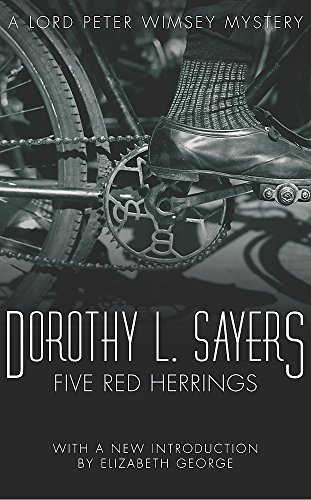 Lord Peter Wimsey must ferret out a murderer in a Scottish art colony in this classic tale from Dorothy L. Sayers.

In the scenic Scottish village of Kirkcudbright, no one is disliked more than the painter Sandy Campbell. When he is found dead at the foot of a cliff, his easel standing above, no one is sorry to see him gone—especially six members of the close-knit Galloway artists' colony.

The inimitable Lord Peter Wimsey is on the scene to determine the truth about Campbell's death. Piecing together the evidence, the aristocratic sleuth discovers that of the six suspected painters, five are red herrings, innocent of the crime. But just which one is the ingenious artist with a talent for murder?

Lord Peter Wimsey could imagine the artist stepping back, the stagger, the fall, down to where the pointed rocks grinned like teeth.
But was it an accident - or murder? Six members of the close-knit Galloway artists' colony do not regret Campbell's death.
Five of them are red herrings.