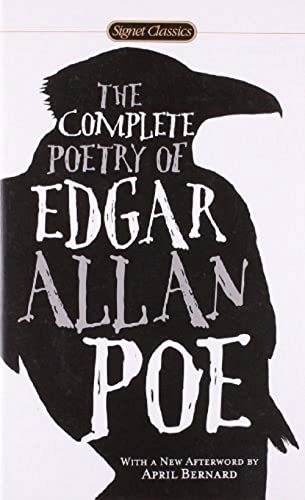 Edgar Allan Poe was born in Boston in 1809, but was orphaned in 1811 and went to live with a foster family in Virginia. The relationship was conflicted, and the Allans withdrew their financial support after Poe had completed only one semester at the University of Virginia. He enlisted in the Army, then enrolled briefly in West Point, meanwhile publishing three volumes of poetry: Tamerlane (1827), Al Aaraaf (1829), and Poems (1831). From 1831 to 1835, he lived in Baltimore with his aunt, where despite his increasing literary success, he began a lifelong struggle with poverty and addiction to alcohol. In May 1836, he married his first cousin, Virginia Clemm, a child of thirteen. In April 1844, he moved his family to New York, and in January of the following year, his literary fortunes turned when his poem “The Raven” appeared in the New York Evening News. Overnight, he became the most talked-about man of letters in America. Early in 1847 his wife died of tuberculosis and he sank further into alcoholism. On October 3, 1849 he was found wandering the streets of Baltimore, delirious, and died four days later from an unknown cause.

From the author of “The Tell-Tale Heart,” “The Pit and the Pendulum,” and “The Murders in the Rue Morgue”. . .

Although best known for his short stories, Edgar Allan Poe was by nature and choice a poet. This edition of his complete poetry illustrates the transcendent world of unity and ultimate beauty he created in his verse. From his exquisite lyric “To Helen” to his immortal masterpieces “Annabel Lee,” “The Bells,” and “The Raven,” Poe stands beside the celebrated English Romantic poets Shelley, Byron, and Keats, and his haunting, sensuous poetic vision profoundly influenced the Victorian giants Swinburne, Tennyson, and Rossetti.

Today his dark side speaks eloquently to contemporary readers in his poems, such as “The Haunted Palace” and “The Conqueror Worm,” with their powerful images of madness and the macabre. But even at the end of his life, Poe reached out to his art for comfort and courage, giving us in “Eldorado” a talisman to hold during our darkest moments—a timeless gift from an American writer.

Description du livre Signet Classics October 2008, 2008. Mass Market Paperback. Etat : New. Firefly sells new and used books through our store front. We try to add a detailed description to as many titles as possible. If you have questions regarding this title, please contact us. Photos available on request. N° de réf. du vendeur 274994