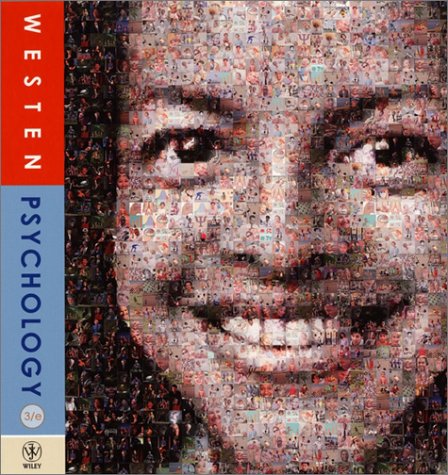 In this detail, you can see some of the images that make the PhotomasaicTM on the cover of Drew Westen′s new Third Edition of PSYCHOLOGY. The photographers and illustrations, some of which are from the text, reflect the many diverse aspects of psychology.

It′s sometimes hard to make sense of so many disparate and often conflicting ideas and areas of study. But jist like the PhotomosaicTM, when you take a step back you can see the big picture.

Drew Westen′s clear, engaging voice and his comprehensive, accurate coverage of current topics in psychology help students make connections between key psychological concepts and understand the discipline as a whole. Updated and revided, the Third Edition features several new pedagogical tools that enable students see these connections more easily and think actively and critically about what they are learning.

Drew Westen is Research Associate Professor in the Department of Psychology and Director of the Adolescent and Adult Personality Programs at the Center for Anxiety and Related Disorders at Boston University. He received his B.A. at Harvard University, an M.A. in Social and Political Thought at the University of Sussex (England), and his Ph.D. in Clinical Psychology at the University of Michigan, where he subsequently taught for six years. While at the University of Michigan, he was honored two years in a row by the Michigan Daily as the best teaching professor at the university, and was the recipient of the first Golden Apple Award for outstanding undergraduate teaching. More recently, he was selected as a G. Stanley Hall Lecturer by the American Psychological Association. Professor Westen is an active researcher who is on the editorial boards of multiple journals, including Clinical Psychology: Science and Practice, Psychological Assessment, and the Journal of Personality Disorders. His major area of research are personality disorders, eating disorders, emotion regulation, implicit processes, psychotherapy effectiveness, and adolescent psychopathology. His series of videotaped lectures on abnormal psychology, called Is Anyone Really Normal? was published  by the Teaching Company, in collaboration with the Smithsonian Institution. He also provides psychological commentaries on political issues for All Things Considered on National Public Radio. His main loves outside of psychology are his wife, Laura, and his baby daughter, Mackenzie. He also writes comedy music, has performed as a stand–up–comic in Boston, and has performed and directed improvisational comedy for the President of the United States.