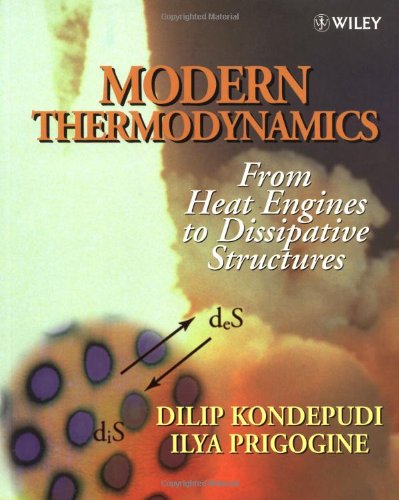 Thermodynamics is a core part of most science and engineering curricula. However, most texts that are currently available to students still treat thermodynamics very much as it was presented in the 19th century, generally for historical rather than pedagogical reasons. Modern Thermodynamics takes a different approach, and deals with the relationship between irreversible processes and entropy.The relationship between irreversible processes and entropy is introduced early on, enabling the reader to benefit from seeing the relationship in such processes as heat conduction and chemical reactions. This text presents thermodynamics in a contemporary and exciting manner, with a wide range of applications, and many exercises and examples. Students are also encouraged to use computers through the provision of Mathematica code and Internet / WWW addresses where real data and additional information can be found.

· An extensive range of applications drawn from science and engineering, along with many real world examples, and exercises.

· Written by two well–known authors, of whom Professor llya Prigogine was awarded the Nobel Prize for his

Modern Thermodynamics From Heat Engines to Dissipative Structures Dilip K. Kondepudi Wake Forest University and Ilya Prigogine International Solvay Institutes and University of Texas at Austin Modern Thermodynamics is a comprehensive introduction to this important subject, presenting a unified view of both equilibrium and nonequilibrium thermodynamics. Introducing the subject in a modern and exciting way, the relationship between irreversible processes that occur naturally and the rate of increase of entropy is introduced early on, enabling the reader to benefit from seeing this relationship in such processes as heat conduction and chemical reactions. The importance played by historical developments is also recognized, and topics are often presented in their historical context, leading to a fuller appreciation of the subject. Recognising the importance of computers in this field, readers are encouraged to solve problems using computers and access thermodynamic data and information on the World Wide Web. Modern Thermodynamics:
∗ Presents thermodynamics as a science of irreversible processes.
∗ Takes a unified view of both equilibrium and nonequilibrium thermodynamics.
∗ Contains many applications drawn from science and engineering, along with real world examples and problems.
∗ Encourages the reader to access real data and information on the Web through the provision of WWW addresses.
∗ Shows the reader how to solve problems using computer packages such as Mathematica.