Articles liťs ŗ The Complete Engravings, Etchings and Drypoints of...

The Complete Engravings, Etchings and Drypoints of Albrecht Duurer 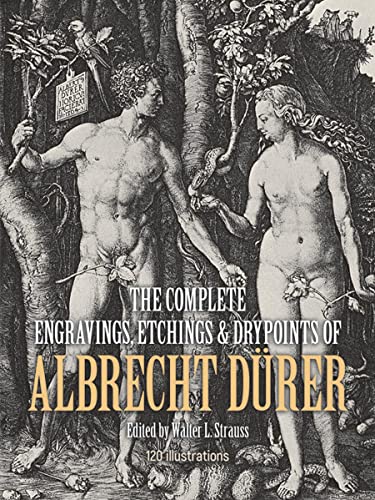 2. The Complete Engravings, Etchings and Drypoints of Albrecht Durer (Paperback)

Description du livre Dover Publications Inc., United States, 1972. Paperback. Etat : New. 2nd edition. Language: English. Brand new Book. Albrecht DŁrer's 96 engravings, six etchings, and three dynamic drypoints are counted among his finest and best-known works. By the very nature of the medium, each fine line of an engraving is controlled by the artist and is dependent upon the pressure of the burin in his hand. In the engravings, DŁrer was therefore able to achieve an unprecedented intricacy of detail, subtlety of line, and three-dimensionality.All 105 of DŁrer's works in these three mediums are reproduced in this edition. Among them are his most famous works, "Knight, Death and Devil," "Melencolia I," and "St. Jerome in His Study"; also portraits of his contemporaries, including Erasmus of Rotterdam and Frederick the Wise, popular and religious subjects sold by DŁrer's wife at fairs, "Adam and Eve," the Engraved Passion (15 subjects), and "The Virgin with the Dragonfly." Many of these show him even more charming and subtle than do the comparative woodcuts. Reproductions of experimental impression offer the opportunity to study DŁrer's working method. DŁrer's subjects range from scenes of the New Testament and the life of the Saints to portrayals of peasant personalities and representations of portentous events, such as "The Four Witches" and "Sol Justitae," done in 1499 in anticipation of the Final Judgment that was widely predicted for the end of the century. The engraving "The Monstrous Sow of Landser," a pig born with one head, four ears, two bodies, eight feet, on six of which it stood, and with two tongues," similarly recorded in event that was regarded as an ill omen.In the present edition, by means of shooting in most instances directly to lithographic film from the finest impressions, the engravings, where possible, have been printed so that even under a magnifying glass DŁrer's exact lines can be seen. Likewise, except in a very few cases, the sizes have been kept exactly to the originals, complete with border-lines where indicated. Walter L. Strauss has prepared the commentary for this edition with references to major catalogs, a summary of the statements of earlier commentators, and background material on the engravings, on DŁrer, and on the subjects of the works. If you are interested in DŁrer, a copy of this edition of the engravings is a must. Nį de rťf. du vendeur AAC9780486228518

3. The Complete Engravings, Etchings and Drypoints of Albrecht Durer (Paperback)

Description du livre Paperback. Etat : New. 2nd. Paperback. All of Durer's works in three mediums are reproduced in this edition. Among them are his most famous works, Knight, Death and Devil; Melencolia I; and St. Jerome in His Study. Also include.Shipping may be from multiple locations in the US or from the UK, depending on stock availability. 235 pages. 0.689. Nį de rťf. du vendeur 9780486228518

5. The Complete Engravings, Etchings and Drypoints of Albrecht Drer

10. The Complete Engravings, Etchings and Drypoints of Albrecht Drer