Articles liés ŕ How We Think

Dewey, John How We Think 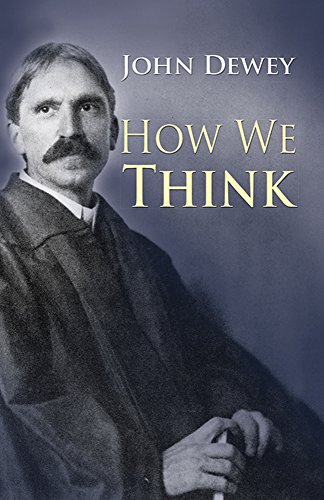 How We Think One of America's most prominent pedagogues discusses training students to think well. This educational classic covers inductive and deductive logic, concrete and abstract thinking, and many other aspects of thought training. Full description

"How We Think" by John Dewey is a classic book about thinking. The contents of Dewey's book are applicable to innovation, learning, business management, and many other fields. John Dewey's view of thinking, and thinking skills, as elaborated in "How We Think" is surprisingly fresh and consistent. Dewey warns against the confusion of mental analysis (looking for the general aspects of an object) with physical analysis (dissection into parts), which leads to the study of living objects as if they were dead. John Dewey's thought is the essence of systems thinking, which is so fashionable today. In "How We Think," John Dewey also concludes that we can be taught to "think well" and discusses how. Starting with beliefs and the consequences they bring about, Dewey suggests that knowledge is relative to its interaction with the world, concluding in the end that real freedom is intellectual. According to Dewey, the act of thinking itself is in many cases more important than what is being thought about. Dewey's analysis of thought will help readers to consider important elements of thinking (and writing) such as: (1) the iterative "ebb and flow" between inductive and deductive thinking; (2) what is necessary to train their minds to think better. Though written years ago, "How We Think" is an easy book to read and well worth the time spent on it.

John Dewey (1859 1952) was an American philosopher, psychologist and educational reformer whose ideas have been influential in education and social reform. Dewey was an important early developer of the philosophy of pragmatism and one of the founders of functional psychology. He was a major representative of progressive education and liberalism.In 1894 Dewey joined the newly founded University of Chicago(1894 1904) where he developed his belief in an empirically based theory of knowledge, becoming associated with the newly emerging Pragmatic philosophy. His time at the University of Chicago resulted in four essays collectively entitled Thought and its Subject-Matter, which was published with collected works from his colleagues at Chicago under the collective title Studies in Logical Theory (1903). During that time Dewey also initiated the University of Chicago Laboratory Schools, where he was able to actualize the pedagogical beliefs that provided material for his first major work on education, The School and Social Progress (1899). In 1899, Dewey was elected president of the American Psychological Association. From 1904 until his retirement in 1930 he was professor of philosophy at both Columbia University and Columbia University's Teachers College. In 1905 he became president of the American Philosophical Association. He was a longtime member of the American Federation of Teachers.