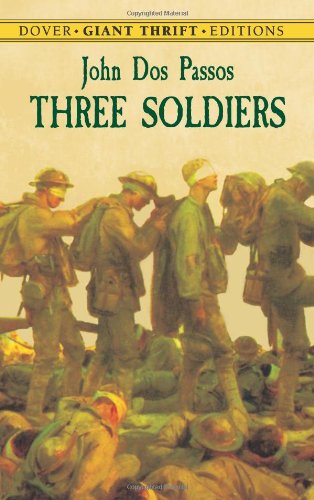 The company stood at attention, each man looking straight before him at the empty parade ground, where the cinder piles showed purple with evening. On the wind that smelt of barracks and disinfectant there was a faint greasiness of food cooking.

At the other side of the wide field long lines of men shuffled slowly into the narrow wooden shanty that was the mess hall. Chins down, chests out, legs twitching and tired from the afternoon’s drilling, the company stood at attention. Each man stared straight in front of him, some vacantly with resignation, some trying to amuse themselves by noting minutely every object in their field of vision,—the cinder piles, the long shadows of the barracks and mess halls where they could see men standing about, spitting, smoking, leaning against clapboard walls. Some of the men in line could hear their watches ticking in their pockets.

Someone moved, his feet making a crunching noise in the cinders.

The sergeant’s voice snarled out: “You men are at attention. Quit yer wrigglin’ there, you!”

The men nearest the offender looked at him out of the corners of their eyes.

Two officers, far out on the parade ground, were coming towards them. By their gestures and the way they walked, the men at attention could see that they were chatting about something that amused them. One of the officers laughed boyishly, turned away and walked slowly back across the parade ground. The other, who was the lieutenant, came towards them smiling. As he approached his company, the smile left his lips and he advanced his chin, walking with heavy precise steps.

“Sergeant, you may dismiss the company.” The lieutenant’s voice was pitched in a hard staccato.

The sergeant’s hand snapped up to salute like a block signal.

The row of men in khaki became a crowd of various individuals with dusty boots and dusty faces. Ten minutes later they lined up and marched in a column of fours to mess. A few red filaments of electric lights gave a dusty glow in the brownish obscurity where the long tables and benches and the board floors had a faint smell of garbage mingled with the smell of the disinfectant the tables had been washed off with after the last meal. The men, holding their oval mess kits in front of them, filed by the great tin buckets at the door, out of which meat and potatoes were splashed into each plate by a sweating K.P. in blue denims.

“Don’t look so bad tonight,” said Fuselli to the man opposite him as he hitched his sleeves up at the wrists and leaned over his steam- ing food. He was sturdy, with curly hair and full vigorous lips that he smacked hungrily as he ate.

“It ain’t,” said the pink flaxen-haired youth opposite him, who wore his broad-brimmed hat on the side of his head with a certain jauntiness.

“I got a pass tonight,” said Fuselli, tilting his head vainly.

“Yer right not to go with any of the girls in this goddam town. . . . They ain’t clean, none of ’em. . . . That is if ye want to go overseas.” The flaxen-haired youth leaned across the table earnestly.

“I’m goin’ to git some more chow. Wait for me, will yer?” said Fuselli.

“What yer going to do down town?” asked the flaxen-haired youth when Fuselli came back.

“Dunno,—run round a bit an’ go to the movies,” he answered, filling his mouth with potato.

“Gawd, it’s time fer retreat.” They overheard a voice behind them.

Fuselli stuffed his mouth as full as he could and emptied the rest of his meal reluctantly into the garbage pail. A few moments later he stood stiffly at attention in a khaki row that was one of hundreds of other khaki rows, identical, that filled all sides of the parade ground, while the bugle blew somewhere at the other end where the flag-pole was. Somehow it made him think of the man behind the desk in the office of the draft board who had said, handing him the papers sending him to camp, “I wish I was going with you,” and had held out a white bony hand that Fuselli, after a moment’s hesitation, had taken in his own stubby brown hand. The man had added fervently, “It must be grand, just grand, to feel the danger, the chance of being potted any minute. Good luck, young feller. . . . Good luck.” Fuselli remembered unpleasantly his paper-white face and the greenish look of his bald head; but the words had made him stride out of the office sticking out his chest, brushing truculently past a group of men in the door. Even now the memory of it, mixing with the strains of the national anthem, made him feel important, truculent.

“Squads right!” came an order. Crunch, crunch, crunch in the gra- vel. The companies were going back to their barracks. He wanted to smile but he didn’t dare. He wanted to smile because he had a pass till midnight, because in ten minutes he’d be outside the gates, outside the green fence and the sentries and the strands of barbed wire. Crunch, crunch, crunch; oh, they were so slow in getting back to the barracks and he was losing time, precious free minutes. “Hep, hep, hep,” cried the sergeant, glaring down the ranks, with his aggressive bulldog expression, to where someone had fallen out of step.

The company stood at attention in the dusk. Fuselli was biting the inside of his lips with impatience. Minutes dragged by.

At last, as if reluctantly, the sergeant sang out:

Fuselli hurried towards the gate, brandishing his pass with an important swagger.

Once out on the asphalt of the street, he looked down the long row of lawns and porches where violet arc lamps already contested the faint afterglow, drooping from their iron stalks far above the recently planted saplings of the avenue. He stood at the corner slouched against a telegraph pole, with the camp fence, surmounted by three strands of barbed wire, behind him, wondering which way he would go. This was a hell of a town anyway. And he used to think he wanted to travel round and see places.—“Home’ll be good enough for me after this,” he muttered. Walking down the long street towards the center of town, where was the moving-picture show, he thought of his home, of the dark apartment on the ground floor of a seven-storey house where his aunt lived. “Gee, she used to cook swell,” he murmured regretfully.

On a warm evening like this he would have stood round at the corner where the drugstore was, talking to fellows he knew, giggling when the girls who lived in the street, walking arm and arm, twined in couples or trios, passed by affecting ignorance of the glances that followed them. Or perhaps he would have gone walking with Al, who worked in the same optical-goods store, down through the glaring streets of the theatre and restaurant quarter, or along the wharves and ferry slips, where they would have sat smoking and looking out over the dark purple harbor, with its winking lights and its moving ferries spilling swaying reflections in the water out of their square reddish-glowing windows. If they had been lucky they would have seen a liner come in through the Golden Gate, growing from a blur of light to a huge moving brilliance, like the front of a high-class theatre, that towered above the ferry boats. You could often hear the thump of the screw and the swish of the bow cutting the calm baywater, and the sound of a band playing, that came alternately faint and loud. “When I git rich,” Fuselli had liked to say to Al, “I’m goin’ to take a trip on one of them liners.”

“Yer dad come over from the old country in one, didn’t he?” Al would ask.

“Oh, he came steerage. I’d stay at home if I had to do that. Man, first class for me, a cabin de lux, when I git rich.” But here he was in this town in the East, where he didn’t know anybody and where there was no place to go but the movies.

“ ’Lo, buddy,” came a voice beside him. The tall youth who had sat opposite at mess was just catching up to him. “Goin’ to the movies?”

“Here’s a rookie. Just got to camp this mornin’,” said the tall youth, jerking his head in the direction of the man beside him.

“You’ll like it. Ain’t so bad as it seems at first,” said Fuselli encouragingly.

“New York,” said the rookie, a little man of thirty with an ash- colored face and a shiny Jewish nose. “I’m in the clothing business there. I oughtn’t to be drafted at all. It’s an outrage. I’m consumptive.” He spluttered in a feeble squeaky voice.

“Bein’ from New York. The corporal, Tim Sidis, is from New York, an’ all the New York fellers in the company got a graft with him.”

“What kind of cigarettes d’ye smoke?” asked the tall youth.

“Ye’d better learn. The corporal likes fancy ciggies and so does the sergeant; you jus’ slip ’em each a butt now and then. May help ye to get in right with ’em.”

“Don’t do no good,” said Fuselli. . . . “It’s juss luck. But keep neat-like and smilin’ and you’ll get on all right. And if they start to ride ye, show fight. Ye’ve got to be hard boiled to git on in this army.”

“No, I’m trying to find a skirt.” The little man leered wanly. “Glad to have got ackwainted.”

“Goddam kike!” said Powers as Eisenstein walked off up a side street, planted, like the avenue, with saplings on which the sickly leaves rustled in the faint breeze that smelt of factories and coal dust.

They were coming out of the movies in a stream of people in which the blackish clothes of factory-hands predominated.

“I came near bawlin’ at the picture of the feller leavin’ his girl to go off to the war,” said Fuselli.

“It was just like it was with me. Ever been in Frisco, Powers?”

The tall youth shook his head. Then he took off his broad-brimmed hat and ran his fingers over his stubbly tow-head.

“Gee, it was some hot in there,” he muttered.

“It’s hell sayin’ good-bye to girls,” said Powers, understandingly. “Cuts a feller all up. I guess it’s better to go with coosies. Ye don’t have to say good-bye to them.”