A History of Modern Palestine: One Land, Two Peoples 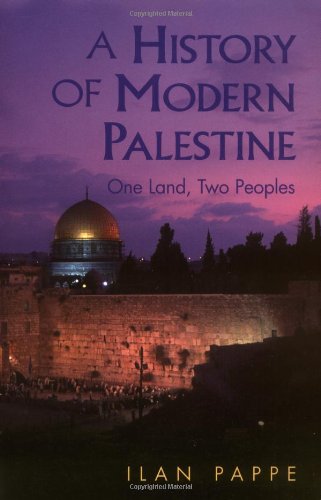 'Along with the late Edward Said, Ilan Pappe is the most eloquent writer of Palestinian history. He is also one of the most scholarly ... here, for the first time, is a textbook on Palestine that narrates the real story as it happened - a non-Zionist version of Zionism ... To its credit, Cambridge university Press has published Pappe's pioneering and highly accessible work as an authoritative history.' New Statesman

'Ilan Pappe is a 'new historian' and this book is true to this label. It adopts a revisionist approach and it challenges the old ways in which the history of Palestine is written which makes it such an exciting read.' Ahron Bregman, International Affairs

' ... Ilan Pappe has written a book that is lucid and fort[hright]. It is a unique contribution to the history of this troubled land, and all those concerned with developments in the Middle East will have to read ... Ilan Pappe's book is a valuable contribution to the historical research of Palestine as a general survey for those studying the subject. Designed for students and general readers, the book's new approach to the analysis of well-known events will be of interest to academics, journalists, foreign-policy makers, and to all those concerned with Palestine's complex past and its uncertain future. The inclusion of illustrations, maps, short biographies, a glossary of terms, a bibliography, and a reliable index further increases the usefulness of the book.' Quarterly Journal of African and Asian Studies

'Pappe's new book is lucid and readable: its historical scope, taking up the story in 1856, is useful and welcome because unusual, as is its desire to distance the narrative of the peoples living on the land of Mandate Palestine from their respective nationalisms - and to incorporate the subaltern classes to balance out the overwhelming prominence of elites in the existing historiography.' Tribune

'... excellent analysis of the historical background to the present state of the Israel-Palestine conflict. ... a thoughtful and well-researched volume which needs to be read by anyone who has an interest in the region's histories, politics and faiths.' Reviews in Religion and Theology

'The author's approach is valuable and fresh ...' Yearbook of Overseas History

Ilan Pappe writes the story of Palestine, a land inhabited by two peoples. It begins with the Ottomans in the early 1800s and traces a path through the arrival of the early Zionists at the end of that century, through the British mandate at the beginning of the twentieth century, the establishment of the state of Israel in 1948, and the subsequent wars and conflicts which culminated in the intifadas of 1987 and 2000. While these events provide the background to the narrative and explain the construction of Zionist and Palestinian nationalism, at centre stage are those who lived through these times, men, women and children, Jews and Arabs. It is a story of coexistence, as well as oppression, occupation, and exile. Ilan Pappe is well-known as a revisionist historian of Israel. Lucid and typically forthright, his account is a unique contribution to the history of this troubled land.

1. A History of Modern Palestine: One Land, Two Peoples

2. A History of Modern Palestine: One Land, Two Peoples