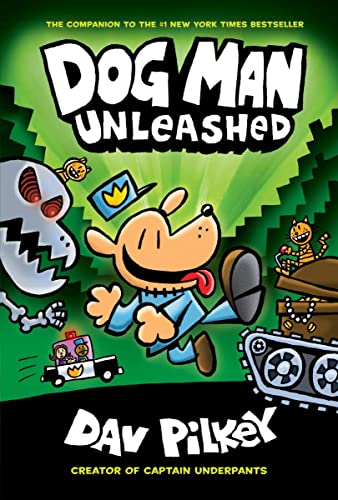 Dog Man is back and he's got a bone to pick with the world's fiercest feline felon! Dog Man, the newest hero from the creator of Captain Underpants, is still learning a few tricks of the trade. If only the Chief would throw him a bone every once in a while. Petey the cat is out of the bag, and his criminal curiosity is taking the city by storm. Can the canine crime biter unleash justice on this ruffian in time to save the city, or will Petey get away with the purrfect crime?

As a child, Dav Pilkey was diagnosed with dyslexia and ADHD. Dav was so disruptive in class that his teachers made him sit out in the hall every day. Luckily, Dav loved to draw and make up stories, so he spent his time in the hallway creating his own original comic books. In the second grade, Dav Pilkey created a comic book about a superhero named Captain Underpants. His teacher ripped it up and told him he couldn’t spend the rest of his life making silly books. Fortunately, Dav was not a very good listener. Dav has gone on to create award-winning and bestselling books for children. His Captain Underpants series has more than 80 million copies in print worldwide and has been translated into more than 28 languages. In 2017, DreamWorks Animation brought the character to the silver screen in the feature film adaptation Captain Underpants: The First Epic Movie, and Netflix is now streaming The Epic Tales of Captain Underpants TV show. Dav’s latest creation, Dog Man, continues to be a #1 New York Times bestselling series with more than 23 million copies in print worldwide and translations available in more than 27 languages. Dav is also the creator of the Dragon series, the Dumb Bunnies series, Dog Breath, and The Paperboy, which is a Caldecott Honor Book. Dav lives in the Pacific Northwest with his wife.

Howl with laughter with Dog Man, the internationally bestselling series from Dav Pilkey, the creator of Captain Underpants!

Dog Man is still learning a few tricks of the trade. Petey the cat is out of the bag, and his criminal curiosity is taking the city by storm. Something fishy is going on! Can Dog Man unleash justice on this ruffian in time to save the city, or will Petey get away with the purr-fect crime?

Dav Pilkey's wildly popular Dog Man series appeals to readers of all ages and explores universally positive themes, including empathy, kindness, persistence, and the importance of being true to one's self.

Description du livre Graphix, 2016. Hardcover. Etat : New. Pilkey, Dav (illustrateur). Illustrated. All books are mailed out in a bubble wrap mailer to protect your purchase. Orders are ALWAYS shipped same day or next day with FREE TRACKING emailed to you automatically. (WE TRY HARD TO DESCRIBE OUR BOOKS ACCURATELY SO YOU CAN BUY WITH CONFIDENCE). NḞ de réf. du vendeur 352D3X000P32

3. DOG MAN UNLEASHED: FROM THE CREA

4. DOG MAN UNLEASHED: FROM THE CREA

5. DOG MAN UNLEASHED: FROM THE CREA