Articles liés ŕ The Illustrated A Brief History of Time: Updated and...

Hawking, Stephen The Illustrated A Brief History of Time: Updated and Expanded Edition

The Illustrated A Brief History of Time: Updated and Expanded Edition 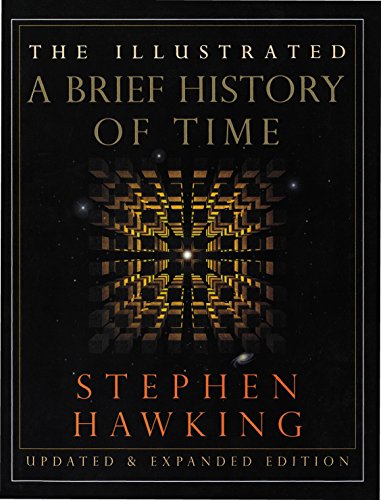 In the years since its publication in 1988, Stephen Hawking's A Brief History Of Time has established itself as a landmark volume in scientific writing. It has become an international publishing phenomenon, translated into forty languages and selling over nine million copies. The book was on the cutting edge of what was then known about the nature of the universe, but since that time there have been extraordinary advances in the technology of macrocosmic worlds. These observations have confirmed many of Professor Hawkin's theoretical predictions in the first edition of his book, including the recent discoveries of the Cosmic Background Explorer satellite (COBE), which probed back in time to within 300,000 years of the fabric of space-time that he had projected. Eager to bring to his original text the new knowledge revealed by these many observations, as well as his recent research, for this expanded edition Professor Hawking has prepared a new introduction to the book, written an entirely new chapter on the fascinating subject of wormholes and time travel, and updated the original chapters. In addition, to heighten understanding of complex concepts that readers may have found difficult to grasp despite the clarity and wit of Professor Hawking's writing, this edition is enhanced throughout with more than 240 full-color illustrations, including satellite images, photographs made made possible by spectacular technological advance such as the Hubble Space Telescope, and computer generated images of three and four-dimensional realities. Detailed captions clarify these illustrations, enable readers to experience the vastness of intergalactic space, the nature of black holes, and the microcosmic world of particle physics in which matters and antimatter collide. A classic work that now brings to the reader the latest understanding of cosmology, A Brief History Of Time is the story of the ongoing search for t he tantalizing secrets at the heart of time and space.

I didn't write a foreword to the original edition of A Brief History of Time. That was done by Carl Sagan. Instead, I wrote a short piece titled "Acknowledgments" in which I was advised to thank everyone. Some of the foundations that had given me support weren't too pleased to have been mentioned however, because it led to a great increase in applications.

I don't think anyone, my publishers, my agent, or myself, expected the book to do anything like as well as it did. It was on the London Sunday Times best seller list for 237 weeks, longer than any other book (apparently, the Bible and Shakespeare aren't counted). It has been translated into something like forty languages and has sold about one copy for every 750 men, women, and children in the world. As Nathan Myhrvold of Microsoft (a former postdoc of mine) remarked: I have sold more books on physics than Madonna has on sex.

The success of A Brief History indicates that there is widespread interest in the big questions like: where did we come from? And why is the universe the way it is? However, I know that many people have found parts of the book difficult to follow. The aim in this new edition is to make it easier by including large numbers of illustrations. Even if you only look at the pictures and their captions, you should get some idea of what is going on.

I have taken the opportunity to update the book and include new theoretical and observational results obtained since the book was first published (on April Fools' Day, 1988). I have included a new chapter on wormholes and time travel. Einstein's General Theory of Relativity seems to offer the possibility that we could create and maintain wormholes, little tubes that connect different regions of space-time. If so, we might be able to use them for rapid travel around the galaxy or travel back in time. Of course, we have not seen anyone from the future (or have we?) but I discuss a possible explanation for this.

I also describe the progress that has been made recently in finding "dualities" or correspondences between apparently different theories of physics. These correspondences are a strong indication that there is a complete unified theory of physics, but they also suggest that it may not be possible to express this theory in a single fundamental formulation. Instead, we may have to use different reflections of the underlying theory in different situations. It might be like our being unable to represent the surface of the earth on a single map and having to use different maps in different regions. This would be a revolution in our view of the unification of the laws of science but it would not change the most important point: that the universe is governed by a set of rational laws that we can discover and understand.

On the observational side, by far the most important development has been the measurement of fluctuations in the cosmic microwave background radiation by COBE (the Cosmic Background Explorer satellite) and other collaborations. These fluctuations are the fingerprints of creation, tiny initial irregularities in the otherwise smooth and uniform early universe that later grew into galaxies, stars, and all the structures we see around us. Their form agrees with the predictions of the proposal that the universe has no boundaries or edges in the imaginary time direction; but further observations will be necessary to distinguish this proposal from other possible explanations for the fluctuations in the background. However, within a few years we should know whether we can believe that we live in a universe that is completely self-contained and without beginning or end.
Stephen Hawking
Cambridge, May 1996

"He can explain the complexities of cosmological physics with an engaging combination of clarity and wit—His is a brain of extraordinary power."—New York Review of Books

"Hawking has succeeded in writing two intertwined books, one a highly readable and popular account of the role of time in physics, the other an in-depth review—What makes all this so interesting is Hawking's ability to convoy the essential physics in words alone."—Physics Today

"In his first work of popular science, Stephen Hawking proves himself to be a master of vivid clarity—It's difficult to think of anyone else living who could have put these mathematically formidable subjects more clearly."—Chicago Tribune

"A masterful summary of what physicists now think the world is made of and how it got that way."—Wall Street journal

"This book marries a child's wonder to a genius's intellect. We journey into Hawking's universe while marvelling at his mind."—Sunday Times, London

"The famous theoretical physicist best known for his inquiries into the nature of black holes—turns out to be as skilled a popular writer as he is a mathematician—The result is probably the best single book on astrophysics for the common reader. Thank you, Dr. Hawking!"—Booklist

"Charming and lucid—gives the general reader an opportunity to learn some deep science directly from the source—[A book of] sunny brilliance."—New Yorker

1. The Illustrated Brief History of Time, Updated and Expanded Edition

2. THE ILLUSTRATED BRIEF HISTORY OF

3. THE ILLUSTRATED BRIEF HISTORY OF

4. The Illustrated Brief History of Time, Updated and Expanded Edition

5. The Illustrated Brief History of Time, Updated and Expanded Edition

6. The Illustrated a Brief History of Time: Updated and Expanded Edition (Hardback or Cased Book)

7. THE ILLUSTRATED BRIEF HISTORY OF

8. The Illustrated Brief History of Time, Updated and Expanded Edition

9. The Illustrated Brief History of Time, Updated and Expanded Edition

10. The Illustrated A Brief History of Time