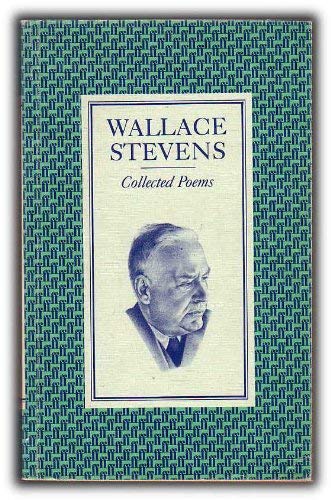 Wallace Stevens was born in Reading, Pennsylvania, on October 2, 1879, and died in Hartford, Connecticut, on August 2, 1955.  Although he had contributed to the Harvard Advocate while in college, he began to gain general recognition only when Harriet Monroe included four of his poems in a sepcial 1914 wartime issue of Poetry.  Harmonium, his first volume of poems, was published in 1923, and was followed by Ideas of Order (1936), The Man with the Blue Guitar (1937), Parts of a World (1942), Transport to Summer (1947), The Auroras of Autumn (1950), The Necessary Angel (a volume of essays, 1951), The Collected Poems of Wallace Stevens (1954), and Opus Posthumous (first published in 1957, edited by Samuel Frued Morse; a new, revised, and corrected edition by Milton J. Bates, 1989).  Mr. Stevens was awarded the Bollingen Prize in Poetry of the Yale University Library for 1949.  In 1951 he won the National Book Award in Poetry for The Auroras of Autumn, in 1955 he won it a second time for The Collected Poems of Wallace Stevens, which was also awarded the Pulitzer Prize in Poetry in 1955.  From 1916 on, he was associated with the Hartford Accident and Indemnity Company, of which he became vice president in 1934.

One must have a mind of winter
To regard the frost and the boughs
Of the pine-trees crusted with snow;

And have been cold a long time
To behold the junipers shagged with ice,
The spruces rough in the distant glitter

For the listener, who listens in the snow,
And, nothing himself, beholds
Nothing that is not there and the nothing that is.

Description du livre Paperback. Etat : Very Good. The book has been read, but is in excellent condition. Pages are intact and not marred by notes or highlighting. The spine remains undamaged. N° de réf. du vendeur GOR002736309

Description du livre Paperback. Etat : Fair. A readable copy of the book which may include some defects such as highlighting and notes. Cover and pages may be creased and show discolouration. N° de réf. du vendeur GOR002960903

Description du livre Paperback. Etat : Very Good. WE ARE PROCESSING ORDERS AS NORMAL DURING THIS VIRUS EPIDEMIC, ALL ITEMS ARE SENT BY ROYAL MAIL. DISPATCHED FROM THE UK WITHIN 24 HOURS ( BOOKS ORDERED OVER THE WEEKEND DISPATCHED ON MONDAY) BY ROYAL MAIL. ALL OVERSEAS ORDERS SENT BY AIR MAIL. WE ALSO ACCEPT PAYMENT IN US DOLLARS OR EURO BY BANK TRANSFER. N° de réf. du vendeur mon0000766538

Description du livre Etat : Good. A+ Customer service! Satisfaction Guaranteed! Book is in Used-Good condition. Pages and cover are clean and intact. Used items may not include supplementary materials such as CDs or access codes. May show signs of minor shelf wear and contain limited notes and highlighting. N° de réf. du vendeur 0571132146-2-4