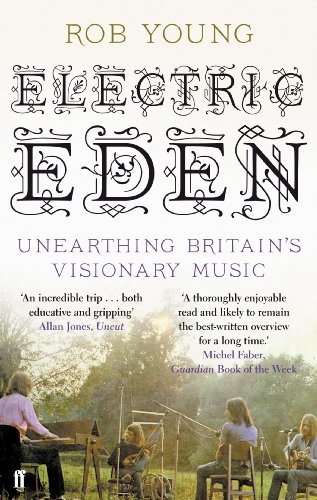 An authoritative account of British 20th-century folk music that is packed with obscure and delightful details. -- The Times

Electric Eden comes into its own as folk-rock capers over the horizon in the mid-1960s ... There are excellent accounts of the rise of bands such as Pentangle, The Incredible String Band and Fairport Convention, alongside pen-portraits of a stream of neglected figures ... Electric Eden makes a persuasive case for folk-rock s essentially liberating nature, and ingeniously links it with the utopian dreams of Britishness of earlier generations of 20th-century folk-revivalists. --
Ludovic Hunter-Tilney, Financial Times

In the face of British folk s sprawling diversity, Young s greatest achievement is to locate a real sense of continuity, a unifying flow that underpins decades, if not centuries, of artistry ... Prepare to wander down countless previously unpondered highways and byways. And prepare to consider Britain s satisfyingly strange and surprisingly hardy indigenous musical heritage afresh. A treat.
Phil Harrison, Time Out Book of the Week *****

Hugely ambitious ... What keeps it consistently readable is the happy marriage between Young s incisive observation and his talent for a vivid phrase ... A thoroughly enjoyable read and likely to remain the best-written overview [of the modern British folk phenomenon] for a long time ... I ve already made several precious musical discoveries thanks to this book and I expect to make more. -- Michel Faber, Guardian Book of the Week

A comprehensive and absorbing exploration of Britain s folk music, which serves, too, as a robust defence of the genre ... What [folk music] emerges as, in this impassioned and infectious rallying cry of a book, is a musical tradition that is about so much more than morris dancing and a determination to hold onto the past. Folk, be it traditional, mystical, mythical, radical or experimental, is a living, breathing form, Young believes. It is everywhere, in all the music we hear, in every song we sing. Electric Eden defies you to disagree. --
Dan Cairns, Sunday Times

Consistently absorbing ... After decades of opportunistic reportage, the modern publisher s catalogue positively crawls with big, serious and thoroughly well-intentioned books about English pop . This is one of the best. --
D J Taylor, Independent

Here is a masterpiece ... nothing less than a magical exploration of transcendent 20th Century British folk music and the folk imagination ... a book that, like the subject itself, redraws the map of cultural Britain, awakening long-dormant protectors, radical spirits and utopian dreamers. Like the revered and forgotten texts Young himself unearths, Electric Eden possesses the power to haunt and enchant for many years to come. --
Andrew Male, Caught by the River

What an incredible trip Rob Young takes us on through time, landscape and music in Electric Eden ... Young s immense narrative is both educative and gripping. -- Allan Jones, Uncut

Young is a fine writer ... [his] substantive achievement is to render folk Britannia as a thing of alluring, durable enigma a fecund, autonomous culture flourishing, for the most part, beyond the cold-hand of commerce and technology yet whose influence bleeds inexorably into the pop hegemony. Obligatory reading for anyone headed into Britain s green festival fields this summer. -- David Sheppard, MOJO *****

'A multitudinous, fascinating and beautifully written account of certain mainly short-lived but haunting developments in folk music ... Equally good to dip in and out of and just be carried along in, it describes commensurately what looks increasingly like another heroic age.' --Michael Hofman, TLS

Rob Young investigates how the idea of folk has been handed down and transformed by successive generations - song collectors, composers, Marxist revivalists, folk-rockers, psychedelic voyagers, free festival-goers, experimental pop stars and electronic innovators. In a sweeping panorama of Albion's soundscape that takes in the pioneer spirit of Cecil Sharp; the pastoral classicism of Ralph Vaughan Williams and Peter Warlock; the industrial folk revival of Ewan MacColl and A. L. Lloyd; the folk-rock of Fairport Convention, Sandy Denny, Nick Drake, Shirley Collins, John Martyn and Pentangle; the bucolic psychedelia of The Incredible String Band, The Beatles and Pink Floyd; the acid folk of Comus, Forest, Mr Fox and Trees; The Wicker Man and occult folklore; the early Glastonbury and Stonehenge festivals; and the visionary pop of Kate Bush, Julian Cope and Talk Talk, Electric Eden maps out a native British musical voice that reflects the complex relationships between town and country, progress and nostalgia, radicalism and conservatism. An attempt to isolate the 'Britishness' of British music - a wild combination of pagan echoes, spiritual quest, imaginative time-travel, pastoral innocence and electrified creativity - Electric Eden will be treasured by anyone interested in the tangled story of Britain's folk music and Arcadian dreams.