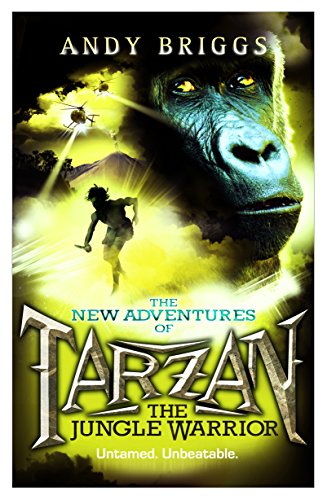 When a baby gorilla is snatched from its family by the world's most infamous hunter, Tarzan will stop at nothing to track him down - crossing the wild jungle and hostile African savannah to bring him to justice. Meanwhile, Jane is trying to learn more about Tarzan's past, and must decide whether reuniting him with his lost Greystoke family is the right thing to do. But Robbie has ideas of his own. He has formed a plan that will get rid of Tarzan for good, and keep the secrets of his own past safe. "Tarzan, The Jungle Warrior" is a lion-roaring read that brings the classic story bang into the 21st century, and will publish at the start of the Tarzan centenary year.

Andy began his writing career working on Hollywood movie projects, such as Freddy Vs Jason and Foreverman for Spider-Man creator Stan Lee and legendary producer Robert Evans. He has written several graphic novels, including the horror-thriller Ritual and Kong King of Skull Island. His first children's books were the eight part Hero.com and Villain.net series for Oxford University Press. He's currently working on several exciting TV and feature projects in between his books. Tarzan has been a passion from childhood and he's thrilled to now be writing and updating the legendary hero.

'The Andy Briggs reboot of Tarzan is one of the best updates I can recall seeing of any classic series ... A stunning ending which left me absolutely desperate to read book 3 ... one which young and old alike will love.' 4.5/5 stars --The Bookbag

'This is a exciting and fast-moving adventure, offering young readers plenty of thrills. Tarzan is a man of few words but much action and Jane is no wallflower, so this tale should appeal to both boys and girls.' --Booktrust