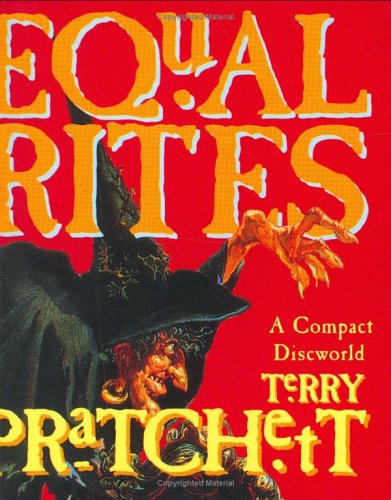 They say that a little knowledge is a dangerous thing, but it is not one half so bad as a lot of ignorance.

There are some situations where the correct response is to display the sort of ignorance which happily and wilfully flies in the face of the facts. In this case, the birth of a baby girl, born a wizard - by mistake. Everybody knows that there's no such thing as a female wizard. But now it's gone and happened, there's nothing much anyone can do about it. Let the battle of the sexes begin...

Terry Pratchett was the acclaimed creator of the global bestselling Discworld series, the first of which, The Colour of Magic, was published in 1983. His fortieth Discworld novel, Raising Steam, was published in 2013. His books have been widely adapted for stage and screen, and he was the winner of multiple prizes, including the Carnegie Medal, as well as being awarded a knighthood for services to literature. He died in March 2015.

Description du livre Hardback. Etat : Very Good. The book has been read, but is in excellent condition. Pages are intact and not marred by notes or highlighting. The spine remains undamaged. N° de réf. du vendeur GOR001403107

Description du livre Hardback. Etat : Fair. A readable copy of the book which may include some defects such as highlighting and notes. Cover and pages may be creased and show discolouration. N° de réf. du vendeur GOR003964062

Description du livre Hardcover. Etat : Used; Good. Dispatched, from the UK, within 48 hours of ordering. This book is in good condition but will show signs of previous ownership. Please expect some creasing to the spine and/or minor damage to the cover. N° de réf. du vendeur CHL7521945

Description du livre Hardcover. Etat : Good. A few small marks or stains to the page edges/pages Good condition is defined as: a copy that has been read but remains in clean condition. All of the pages are intact and the cover is intact and the spine may show signs of wear. The book may have minor markings which are not specifically mentioned. Most items will be dispatched the same or the next working day. N° de réf. du vendeur wbb0020860977