Dawnthief: Chronicles of the Raven 1 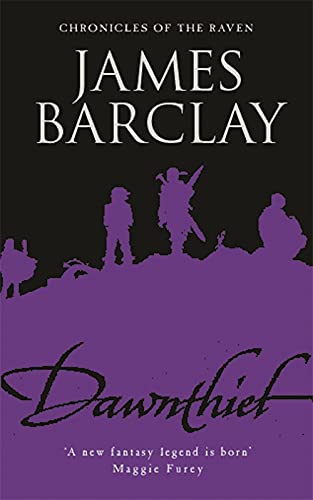 Chronicles of the Raven: One

ELITE, UNSTOPPABLE . . . AND HIRED TO DO THE UNTHINKABLE

The Raven are an elite. Formed of six men and an elf, they're swords for hire in the wars that have torn their land apart. For years their only loyalty has been to themselves, and to their code.

But that time is coming to an end. The Wytch Lords have escaped and The Raven find themselves fighting for the Dark College of magic, on a mission which soon becomes a race for the secret location of Dawnthief. It's a spell - one created to end the world - and there's a danger that someone is going to use it . . .

'If there ever was a case of a plot acting like a man-trap this is it. Barclay brings a genuine aesthetic to the fantasy action novel. A scorching debut' TIME OUT

'Barclay writes with power, pace and a wonderful sense of humour. Better than that, he creates novels you want to read again and again' DAVID GEMMELL

James Barclay is the author of the Chronicles of the Raven and Legends of the Raven series, which have sold hundreds of thousands of copies. The Raven saga came to a conclusion with the stunning Ravensoul.

He also penned the epic fantasy duology The Ascendants of Estorea and completed an Elves trilogy: Elves: Once Walked With Gods, Elves: Rise of the Tai'Gethen and Elves: Beyond the Mists of Katura.

James Barclay lives in Teddington with his wife and two children.

1. Dawnthief: Chronicles of the Raven 1