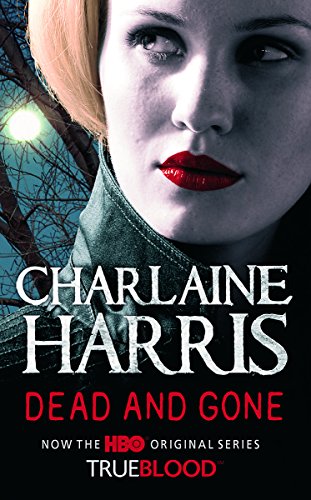 The closer I got to the vampire bar, the more my pulse picked up. This was the downside to the blood bond I had with Eric Northman. I knew I was going to see him, and I was simply happy about it. I should have been worried, I should have been apprehensive about what he wanted, I should have asked a million questions about the velvet-wrapped bundle, but I just drove with a smile on my face.

Though I couldn’t help how I felt, I could control my actions. Out of sheer perversity, since no one had told me to come around to the employees’ entrance, I entered through the main door. It was a busy night at Fangtasia, and there was a waiting crowd on benches inside the first set of doors. Pam was at the podium. She smiled at me broadly, showing a little fang. (The crowd was delighted.)

I’d known Pam for a while now, and she was as close to a friend as I had among the vampires. Tonight the blonde vampire was wearing the obligatory filmy black dress, and she’d camped it up with a long, sheer black veil. Her white fingernails were polished scarlet.

“My friend,” Pam said, came out from behind the podium to hug me. I was surprised but pleased, and gladly hugged her back. She’d spritzed on a little perfume to eclipse the faint, rather dry, smell of vampire. “Have you got it?” she whispered in my ear.“Oh, the bundle? It’s in my purse.” I lifted my big brown shoulder bag by its straps.

Pam gave me a look I couldn’t interpret through the veil. It appeared to be an expression that compounded exasperation and affection. “You didn’t even look inside?”

“I haven’t had time,” I said. It wasn’t that I hadn’t been curious. I simply hadn’t had the leisure to think about it.

Pam gave me a long look of appraisal. “Go back to Eric’s office and hand him the bundle,” she said. “Leave it wrapped. No matter who’s there. And don’t handle it like it was a garden tool he’d left outside, either.”

I gave her the look right back. “What am I doing, Pam?” I asked, jumping on the cautious train way too late.

“You’re protecting your own skin,” Pam said. “Never doubt it. Now go.” She gave me a get-along pat on the back, and turned to answer a tourist’s question about how often vampires needed to get their teeth cleaned.

“Would you like to come very close and look at mine?” Pam asked in a sultry voice, and the woman shrieked with delighted fear. That was why the humans come to vampire bars, and vampire comedy clubs, and vampire dry cleaners, and vampire casinos . . . to flirt with danger.

Every now and then, flirtation becomes the real thing.

I made my way between the tables and across the dance floor to the rear of the bar. Felicia, the bartender, looked unhappy when she saw me. She found something to do that involved crouching down out of my sight. I had an unfortunate history with the bartenders of Fantasia.

There were a few vampires seated throughout the bar area, strewn among the gawking tourists, the costumed vampire wannabes, and humans who had business dealings with the vamps. Over in the little souvenir shop, one of the New Orleans vampire refugees from Katrina was selling a Fangtasia T shirt to a pair of giggling girls.

I walked through the bar and knocked on Eric’s door. I heard his voice inside, telling me to come in. I stepped inside and shut the door behind me. “Hi, Eric,” I said, and was almost rendered mute by the surge of happiness that swept through me whenever I saw him. His long blond hair was braided tonight, and he was wearing his favorite jeans-and-a-T combo. The T shirt tonight was bright green, making him look whiter than ever.

The wave of delight wasn’t necessarily related to Eric’s gorgeousness or the fact that we’d bumped pelvises, though. The blood bond was responsible, and I had to fight the feeling.

Victor Madden, representative of the new vampire king, Felipe de Castro, stood and inclined his curly dark head. Victor, short and compact, was always polite and always well-dressed. This evening he was especially resplendent in an olive suit and brown striped tie. I smiled at him and was about to tell him I was glad to see him again when I noticed that Eric was eyeing me expectantly. Oh, right.

I shucked off my coat and extracted the velvet bundle from my purse. I dropped the purse and coat in an empty chair, and walked over to Eric’s desk with the bundle extended in both hands. This was making as much of the moment as I could, short of getting on my knees and crawling over to Eric, which I would do when hell froze over.

I laid the bundle in front of him, inclined my own head in what I hoped was a ceremonious manner, and sat down in the other guest chair.

“What has our fair-haired friend brought you, Eric?” Victor asked, in the cheerful voice that he affected most of the time. Maybe he was actually that happy, or maybe his mama had taught him (a few centuries ago) that you catch more flies with honey than you do with vinegar.

With a certain sense of theater, Eric silently unfolded the velvet. Sparkling like a jewel on the dark material was the ceremonial knife I’d last seen in the city of Rhodes. Eric had used it when he officiated at the marriage of two vampire kings, and he’d used it to nick himself later when he’d taken blood from me and given me blood in return; our third exchange, the one that (from my point of view) had caused all the trouble.

After Victor recognized the knife, there was no trace of a smile remaining on his face. He and Eric regarded each other steadily.

Once again, I had that feeling of drowning when I hadn’t even known I was in the pool. I started to speak, but I could feel Eric’s will pressing on me, urging me to be silent. In vampire matters, it was smart to take Eric’s advice.

“It’s the kind of book you look forward to reading before you go to bed, thinking you’re only going to read one chapter, and then you end up reading seven.”—Alan Ball, executive producer of True Blood

“Vivid, subtle, and funny in her portrayal of southern life.”—Entertainment Weekly

“The series continues to be inventive and funny with an engaging, smart, and sexy heroine.”—The Denver Post

“Blending action, romance, and comedy, Harris has created a fully functioning world so very close to our own, except, of course, for the vamps and other supernatural creatures.”—The Toronto Star