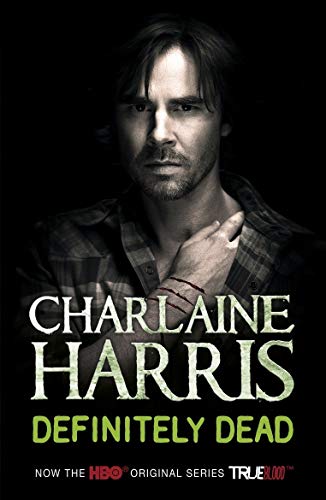 I was draped over the arm of one of the most beautiful men I’d ever seen, and he was staring into my eyes. “Think . . . Brad Pitt,” I whispered. The dark brown eyes still regarded me with remote interest.

Okay, I was on the wrong track.

I pictured Claude’s last lover, a bouncer at a strip joint.

“Think about Charles Bronson,” I suggested. “Or, um, Edward James Olmos.” I was rewarded by the beginnings of a hot glow in those long-lashed eyes.

In a jiffy, you would’ve thought Claude was going to hike up my long rustling skirt and yank down my low-cut push-up bodice and ravish me until I begged for mercy. Unfortunately for me -- and all the other women of Louisiana -- Claude batted for another team. Bosomy and blond was not Claude’s ideal; tough, rough, and brooding, with maybe a little whisker stubble, was what lit his fire.

“Maria-Star, reach in there and pull that lock of hair back,” Alfred Cumberland directed from behind the camera. The photographer was a heavyset black man with graying hair and mustache. Maria-Star Cooper took a quick step in front of the camera to rearrange a stray strand of my long blond hair. I was bent backward over Claude’s right arm, my invisible (to the camera, anyway) left hand desperately clutching the back of his black frock coat, my right arm raised to rest gently on his left shoulder. His left hand was at my waist. I think the pose was meant to suggest that he was lowering me to the ground to have his way with me.

Claude was wearing the black frock coat with black knee pants, white hose, and a white frothy shirt. I was wearing a long blue dress with a billowing skirt and a score of petticoats. As I’ve mentioned, the dress was scanty on the topside, with the little sleeves pushed down off my shoulders. I was glad the temperature in the studio was moderately warm. The big light (it looked to my eyes like a satellite dish) was not as hot as I’d expected.

Al Cumberland was snapping away as Claude smoldered down at me. I did my best to smolder right back. My personal life had been, shall we say, barren for the past few weeks, so I was all too ready to smolder. In fact, I was ready to burst into flames.

Maria-Star, who had beautiful light-toast skin and curly dark hair, was standing ready with a big makeup case and brushes and combs to perform last-minute repairs. When Claude and I had arrived at the studio, I’d been surprised to find that I recognized the photographer’s young assistant. I hadn’t seen Maria-Star since the Shreveport packleader had been chosen a few weeks before. I hadn’t had much of a chance to observe her then, since the packmaster contest had been frightening and bloody. Today, I had the leisure to see that Maria-Star had completely recovered from being hit by a car this past January. Werewolves healed quickly.

Maria-Star had recognized me, too, and I’d been relieved when she smiled back at me. My standing with the Shreveport pack was, to say the least, uncertain. Without exactly volunteering to do so, I’d unwittingly thrown in my lot with the unsuccessful contestant for the packleader’s job. That contestant’s son, Alcide Herveaux, whom I’d counted as maybe more than a friend, felt I’d let him down during the contest; the new packleader, Patrick Furnan, knew I had ties to the Herveaux family. I’d been surprised when Maria-Star chatted away while she was zipping the costume and brushing my hair. She applied more makeup than I’d ever worn in my life, but when I stared into the mirror I had to thank her. I looked great, though I didn’t look like Sookie Stackhouse.

If Claude hadn’t been gay, he might have been impressed, too. He’s the brother of my friend Claudine, and he makes his living stripping on ladies’ night at Hooligans, a club he now owns. Claude is simply mouthwatering; six feet tall, with rippling black hair and large brown eyes, a perfect nose, and lips just full enough. He keeps his hair long to cover up his ears: they’ve been surgically altered to look rounded like human ears, not pointed as they originally were. If you’re in the know supernaturally, you’ll spot the ear surgery, and you’ll know Claude is a fairy. I’m not using the pejorative term for his sexual orientation. I mean it literally; Claude’s a fairy.

“Now the wind machine,” Al instructed Maria-Star, and after a little repositioning, she switched on a large fan. Now we appeared to be standing in a gale. My hair billowed out in a blond sheet, though Claude’s tied-back ponytail stayed in place. After a few shots to capture that look, Maria-Star unbound Claude’s hair and directed it over one shoulder, so it would blow forward to form a backdrop for his perfect profile.

“Wonderful,” Al said, and snapped some more. Maria-Star moved the machine a couple of times, causing the windstorm to strike from different directions. Eventually Al told me I could stand up. I straightened gratefully.

“I hope that wasn’t too hard on your arm,” I told Claude, who was looking cool and calm again.

“Nah, no problem. You have any fruit juice around?” he asked Maria-Star. Claude was not Mr. Social Skills.

The pretty Were pointed to a little refrigerator in the corner of the studio. “Cups are on the top,” she told Claude. She followed him with her eyes, and sighed. Women frequently did that after they’d actually talked to Claude. The sigh was a “what a pity” sigh.

After checking to make sure her boss was still fiddling intently with his gear, Maria-Star gave me a bright smile. Even though she was a Were, which made her thoughts hard to read, I was picking up on the fact that she had something she wanted to tell me . . . and she wasn’t sure how I was going to take it.

Telepathy is no fun. Your opinion of yourself suffers when you know what others think of you. And telepathy makes it almost impossible to date regular guys. Just think about it. (And remember, I’ll know—if you are, or if you aren’t.)

“Alcide’s had a hard time of it since his dad was defeated,” Maria-Star said, keeping her voice low. Claude was occupied with studying himself in a mirror while he drank his juice. Al Cumberland had gotten a call on his cell phone and retreated to his office to hold his conversation.

“I’m sure he has,” I said. Since Jackson Herveaux’s opponent had killed him, it was only to be expected that Jackson’s son was having his ups and his downs. “I sent a memorial to the ASPCA, and I know they’ll notify Alcide and Janet,” I said. (Janet was Alcide’s younger sister, which made her a non-Were. I wondered how Alcide had explained their father’s death to his sister.) In acknowledgement, I’d received a printed thank-you note, the kind the funeral home gives you, without one personal word written on it.

“Well . . .” She seemed to be unable to spit it out, whatever was stuck in her throat. I was getting a glimpse of the shape of it. Pain flickered through me like a knife, and then I locked it down and pulled my pride around me. I’d learned to do that all too early in life.

I picked an album of samples of Alfred’s work and began to flip through them, hardly looking at the photographs of brides and grooms, bar mitzvahs, first communions, twenty-fifth wedding anniversaries. I closed that album and laid it down. I was trying to look casual, but I don’t think it worked.

With a bright smile that echoed Maria-Star’s own expression, I said, “Alcide and I weren’t ever truly a couple, you know.” I might have had longings and hopes, but they’d never had a chance to ripen. The timing had always been wrong.

Maria-Star’s eyes, a much lighter brown than Claude’s, widened in awe. Or was it fear? “I heard you could do that,” she said. “But it’s hard to believe.”

“Yeah,” I said wearily. “Well, I’m glad you and Alcide are dating, and I have no right to mind, even if I did. Which I don’t.” That came out kind of garbled (and it wasn’t entirely true), but I think Maria-Star got my intention: to save my face.

When I hadn’t heard from Alcide in the weeks following his father’s death, I’d known that whatever feelings he’d had for me were quenched. That had been a blow, but not a fatal one. Realistically, I hadn’t expected anything more from Alcide. But gosh darn it, I liked him, and it always smarts when you find out you’ve been replaced with apparent ease. After all, before his dad’s death Alcide had suggested we live together. Now he was shacking up with this young Were, maybe planning to have puppies with her.

I stopped that line of thought in its tracks. Shame on me! No point in being a bitch. (Which, come to think of it, Maria-Star actually was, at least three nights a month.)

Double shame on me.

She wordlessly handed me another album, this one stamped, Eyes Only. When I opened it, I realized that the Eyes were supernatural. Here were pictures of ceremonies humans never got to see . . . a vampire couple dressed in elaborate costume, posed before a giant ankh; a young man in the middle of changing into a bear, presumably for the first time; a shot of a Were pack with all its members in wolf form. Al Cumberland, photographer of the weird. No wonder he had been Claude’s first choice for his pictures, which Claude hoped would launch him on a cover-model career.

“Next shot,” called Al, as he bustled out of his office, snapping his pho...

As a person with so few living relatives, Louisiana cocktail waitress Sookie Stackhouse really hated to lose one. But she never guessed that it would be her cousin Hadley—a consort of the Vampire Queen of New Orleans. After all, technically speaking, Hadley was already dead. And now, as unexpected heir to Hadley’s estate, Sookie discovers the inheritance definitely comes with a risk.

Someone doesn’t want Sookie looking too deeply into Hadley’s past—or for that matter, Hadley’s possessions. And they’re prepared to do anything in their power to stop her. But who? The range of suspects runs from the Rogue Weres who reject Sookie as a friend of the Pack to the Vampire Queen herself, who could be working through a particularly vulnerable subject—Sookie’s first love, Bill.

Whoever it is, they’re definitely dangerous—and Sookie’s life is definitely on the line…

With HBO's launching of an all-new show, True Blood, based on the Southern Vampire novels, the demand for Charlaine Harris and Sookie Stackhouse is bigger than ever.