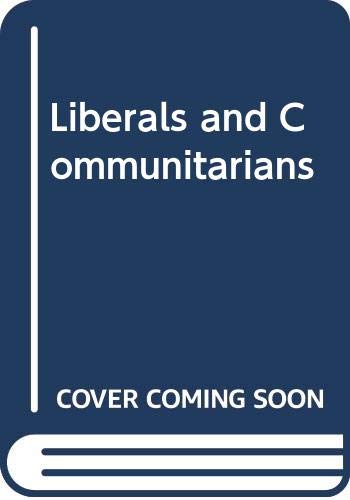 Over the past decade, one of the most controversial and influential challenges to liberal political theory has been mounted by a number of writers usually labelled ′communitarian′. Focusing primarily upon the philosophical and metaphysical underpinnings of liberal accounts of justice, these critics have argued that such accounts presuppose an inadequate conception of the person and of the relationship between individuals and their communities, resulting in an impoverished view of the role of the state.

This book traces the progress of the debate. Beginning with an account of John Rawls′s A Theory of Justice, it goes on to provide clear presentations of the work of the main communitarians – Michael Sandel, Alisdair MacIntyre, Charles Taylor and Michael Walzer. This is followed by an assessment of Rawls′s more recent work, in which his ′political′ liberalism is shown to provide resources for a response to the communitarian critique. Finally the authors examine the writings of two other liberal theorists, Richard Rorty and Joseph Raz, each of whom can be read as pursuing strikingly different lines of argument which avoid the difficulties faced by Rawls but raise new problems of their own.

Clear and accessible in style, with a guiding agenda of themes and issues, this book is an indispensable aid to students of contemporary political theory.

"An admirably clear exposition of the main protagonists in the liberalism–communitarianism debate. Mulhall and Swift provide a valuable service by identifying the various issues in the debate, and by separating out the substance from the rhetoric on both sides" Will Kymlicka, author of Liberalism, Community and Culture

"Their approach is author–based and aimed at the new student. It is clearly written, accessible, and can be recommended with confidence to new students." Political Studies

1. Liberals and Communitarians: An Introduction

2. Liberals and Communitarians: An Introduction